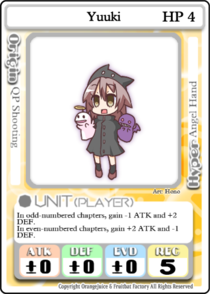 Yuuki (ユウキ Yūki) is one of the playable characters in 100% Orange Juice!. She was added to the game in DLC 23, alongside Islay.

Despite being the adorable wielder of the Angel and Devil puppets, you shouldn't be fooled by this child's mere appearance. Yuuki is a force to be reckoned with, harnessing the power to swap between two powerful statlines depending on whether the chapter is odd-numbered or even-numbered. On odd-numbered chapters, she possesses -1 attack and +2 defense, a tanky statline reminiscent of other tank characters such as Fernet and base Kyousuke. On even-numbered chapter her attack and defense values swap, as she then boasts +2 attack and -1 defense, turning her into a bully character similar to Yuki and Kyousuke under the effects of

Cast Off. The only thing left unchanging is her evasion, which will stay at 0 regardless of the chapter number. With such a bipolar statline, it may be quite difficult to fully utilize her ability of becoming either a tank or a bully, as the player is not in complete control of when she can swap between stats. The key to capitalizing on this ability though is to focus on a playstyle based on positioning and tempo. Positioning yourself in a way and at a time where she can strike one chapter, and defend the next will allow her to effectively cover her weaknesses, letting her take full advantage of each statline. Furthermore, both of her hyper cards can allow her to swing games in her favor, with the unlikely benefit of gaining stars.

Yuuki is a strong character, but she is not invincible, as her flaws can be heavily exploited. As previously mentioned, Yuuki's playstyle is based on tempo and positioning. As such, attacking her at her weakest defensive stat, or forcing her into a situation where it is not viable for her to attack can really throw her off beat. Using cards such as

Reverse Attribute Field is also very effective against Yuuki, turning her into either a weak attacker or fragile defender. Yuuki's low hit points make it safe to exploit these weaknesses, as a high enough roll will most likely end her there. Yuuki should also never really go for the

Boss, as its powerful attack stat can potentially decimate her.

Yuuki should generally focus on star normas, especially in the late-game. Early on she can potentially net a kill or two either through other players, or through

Encounter panels, allowing her to get an easy wins norma. The goal after should be to play safe, and to play in an opportunistic manner, only going for things when she is certain she can obtain them. Having a copy of her hyper and focusing on

Bonus panels will allow her to make do with most situations during the mid and late-game. 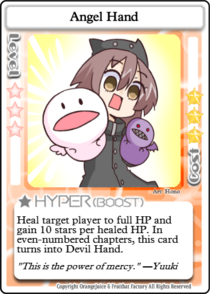 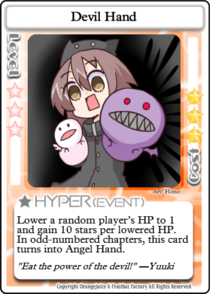 Angel Hand is a healing-based hyper that can not only be used on other players, but it can be used on herself as well. It is not recommended to use this card on others, as the benefit of gaining stars is usually not as impactful as the benefit of being able to save her own life by healing herself. That being said, the card is an excellent star generation tool should a high HP character such as Marie Poppo or Castle present themselves in a scenario in which they are low HP. Angel hand is expensive, and as such it shouldn't be used without care. Players should not only watch out how many stars they can get from healing a player, they should also weigh if it's better to use the hyper on others, or herself.

Devil Hand is a disruption tool, and a technical damage tool. Being that it sets HP down to 1, this card can be effective enabler towards getting an easy KO. Unfortunately, being that it is random like

Gamble!, you can potentially miss your target, or you could give yourself a difficult time by reducing your own HP. You are not likely to use this card for merely its star generation ability, but should you need stars, it is best to use it when most of the characters are either high hp or full.