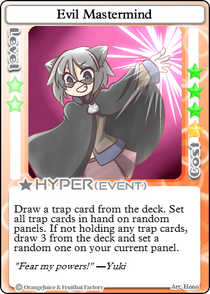 Draw a trap card from the deck. Set all trap cards in hand on random panels. If not holding any trap cards, draw 3 from the deck and set a random one on your current panel.
Hyper Info
Effect Type
Event
Level
2
Cost
13 ★
Symbol
[[File:|30px|link=]]
Illustrator
Hono
"Fear my powers!" -Yuki

Yuki (Dangerous)'s hyper is Evil Mastermind. When the hyper is used,

Evil Mastermind allows Yuki (Dangerous) to place traps at a faster rate than other characters. Due to its moderate cost however, it's better to use it when you have a fair lead against the other players or are about to die to lose less stars on KO. Additionally, the card is best used with either zero traps in hand, or more than one trap. This is because at zero traps you place on on your current panel and draw two, for a total of three traps drawn. With two traps you place the two traps in random locations, and draw a third one for a total of three again. With the Charity event you could even place up to four traps at once. However, with only one trap in hand you place that card and a second one you drew, for only a total of two cards drawn.