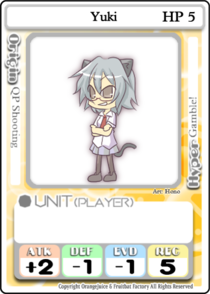 Yuki (ユキ Yuki) is one of the unlockable characters in 100% Orange Juice!. She originates from the game QP Shooting, in which she was the main antagonist.

The villainous leader of the Waruda gang, Yuki is the original bully character, designed to use brute force against her opponents from the start to the conclusion of a match. Yuki features a heavily buffed attack stat, an average health stat, and below average defense and evasion stats, providing her with strong offensive power and very little defensive capability. Consequently, Yuki is built for aggressive play and the player should try to strike first when they have the opportunity, to avoid receiving much counterattack damage from her weak defense. While similar to Tomomo and Store Manager, Yuki does not have the drawbacks of a high recovery stat nor the restrictive passive ability of Star Breaker. As to be expected, Yuki's stats afford her a large combat advantage against all opponents and compensates for her less than stellar Hyper. Unlike some other bullies, Yuki also has the advantage of being able to switch between Wins and Star Norma without any side effects.

The main disadvantage of Yuki is her less than average defense and evade stat, which makes her somewhat of a glass cannon. While Yuki can easily deal damage to her opponents, she does not respond well to retaliation. Fortunately, her solid health stat enables her to take some smaller hits; however, poor rolls will quickly bring her down.

Pros
+One of the best ATK stats in game
+Hyper can be used to self KO, preventing star loss
+Hyper effect will always KO regardless of HP or card effect
+Good HP and REC stat for combat 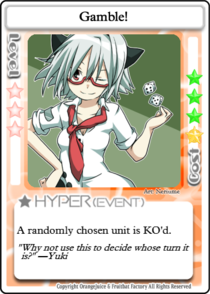 A randomly chosen unit is KO'd.
Hyper Info
Effect Type
Event
Level
3
Cost
13 ★
Symbol
[[File:|30px|link=]]
Illustrator
Neriume
"Why not use this to decide whose turn it is?" - Yuki

Yuki's hyper is Gamble! When the Hyper is used, it causes one random player to be KO'd. This can also affect the user.

Gamble! as the name implies, is a Hyper that randomly KOs a single player with the chance of KOing the player themself. The main advantage of this Hyper is that the KO effect goes through any health amount which can be effective against opponents such as Krila who have the potential to have very high health. The Hyper itself is unique in that it does not deal damage, it simply KO's the opponent. Thus, "Gamble!" will ignore the effects of

Crystal Barrier and KO the opponent. Assuming "Gamble!" hits a favorable target, it can be used to delay a player from achieving a Norma or to prevent them from attacking the player. A very common use of the Hyper is to use it with the intention of suicide, which often happens. This is ideal when Yuki has low health, as she will revive with full health, once again. Another minor advantage of the Hyper is also that it is extremely cheap among Hypers.

The obvious downside to the Hyper, as to be expected, is that the player using the Hyper is included in the pool of potential victims. The only influence the player has over the Hyper is using it when other players are already KO'd, thus increasing the odds of a specific player being KO'd. The KO dealt also does not grant any wins, nor does the KO'd player drop any stars.