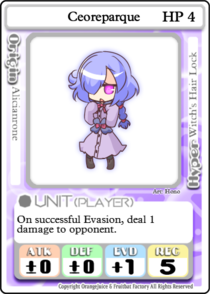 Ceoreparque (ケオレパルケ Keoreparuke) , also known as Repa, is a playable character in 100% Orange Juice!. She was added to the game in DLC 13 alongside Miusaki.

On successful Evasion, deal 1 damage to the opponent.

Ceoreparque is a balanced character structured around one of the most powerful passive abilities in the game. Ceoreparque's passive ability causes the opponent to lose a single point of health every time either Ceoreparque successfully dodges an attack. While possessing a below average health stat which makes her more vulnerable, Ceoreparque features neutral stats and increased evasion stat to enable better dodge capabilities. These stats alongside her effect make her passive particularly potent. This can be a very powerful effect against weak opponents, as even is she leaves the opponent with 1 health, her passive can finish off the opponent. Likewise, the passive can counter tanks as they will often not be able to successfully attack Ceoreparque and suffer an additional point of damage. As a result of her passive, Ceoreparque can generally play both defensively and offensively, depending how the player uses it.

As to be expected, Ceoreparque's main downside is her below average health and reliance on good rolls. Similar to Suguri, she only has a health stat of 4, which can make her vulnerable if she defends and deadly if she fails to evade. As a result, while she does fairly well against random encounters, combat against heavily offensive opponents can be fatal. 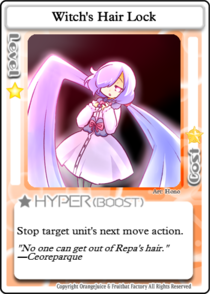 Ceoreparque's Hyper is Witch's Hair Lock. When used, it will lock the target to the panel they are currently on, skipping their next move roll. During the chapter that their move roll is skipped, they will trigger the panel effect of whatever panel they are on. (The user can target themselves)

Witch's Hair Lock is a unique Hyper. The card is not only extremely powerful if used correctly, but is also cheap with a low level requirement for activation. As the Hyper can lock any player the user chooses including themselves to a panel, and causes the panel to re-trigger, it allows for a variety of both offensive and defensive tactics, including, but not limited to:

Arguably, the most powerful tactic, however, is the ability for the player to lock themselves on their own home panel. If the player has at least 210 stars, and uses the Hyper on themselves after receiving Norma level 5, they will automatically win on their next turn if no other player does, as the

The main downside to the Hyper, however, is that it is only powerful at the opportune moment. As the Hyper's effect does not deal damage, put any player in danger by default, or increase Ceoreparque's stats, it is critical that the player times the effect perfectly or its effect will be wasted and have very little impact.