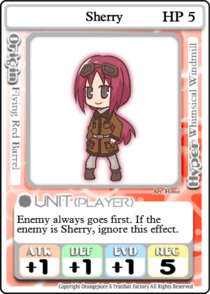 Sherry (シェリー Sherī) is one of the playable characters in 100% Orange Juice. She was added to the game in DLC 6 alongside Sham.

Enemy always attacks first. If the enemy is Sherry, ignore this effect.

Sherry is a unique character, boasting a stat total that is unmatched by any other normal character besides un-softened Tomomo and without the drawbacks of low health like Peat. With these stats, Sherry has two methods of play: she can either be aggressive like Peat and rely on her stats to keep her alive and KO opponents or she can play as a tank with an above average defense stat and average health stat.

Sherry's passive ability is unusual in that unlike the passive of Star Breaker and Tomomo which are designed to more or less disservice the character, Sherry's ability can be both advantageous or disadvantageous based upon the situation. On one end of the spectrum, the ability can be troublesome. Since Sherry can only attack second, she will always be at a disadvantage in combat. If an opponent rolls well, Sherry will be at risk of being KO'd before she can retaliate. An opponent with 1 health maybe even be able to KO her before she can attack. On the reverse side of the spectrum, since Sherry is always the defender in battles, even on

Boss panels, cards that can only be used when the player is defending can always be used, providing a leg up in battle. These battle cards are

Pros
+Best base stats in the game
+Can always use defensive battle cards, as a result of passive ability
+No Hyper reliance

Reverse Attribute Field
-Always attacks second, so is always at a disadvantage in combat 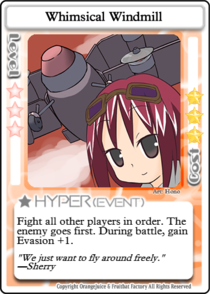 Sherry's Hyper is Whimsical Windmill. Fight all other players in order. The enemy goes first. During battle, gain Evasion +1.

Magical Massacre, is a relatively lackluster Hyper card that is difficult to use effectively, and designed more to buffer Sherry's strong stats. The Hyper itself is rather expensive at a base price of 30 stars and a Norma level requirement of 3. As a result of the price and the risk of fighting every opponent in a single turn, the viability of the Hyper is limited, and care should be taken to ensure that the reward justifies the risks of using the card. Unlike most hypers, while the card does boost Sherry's evasion stat to evade high rolls, it does not increase her attack strength or enable her to attack first meaning she will still be vulnerable. Since Sherry will attack second, all opponents will also be able to use their own battle cards to try and KO Sherry

The Hyper is not without uses however. As to be expected, the Hyper is best used when all opponents are very low on health and when Sherry has full health. If the player is lucky they can activate the Hyper after multiple opponents land on

Invisible Bomb or take a risk if

Sealed Guardian is activated. The risks of combat can also be reduced, as the Hyper is an event card. If Whimsical Windmill is combined with battle cards like

Rainbow-Colored Circle, it can help increase Sherry's survivability. A well timed Whimsical Windmill has the potential to KO all opponents, but if the player miscalculates or consistently rolls poorly, Sherry will very likely end up KO'd.