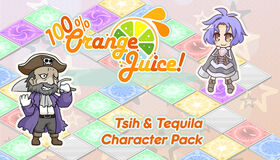 We're happy to announce that two long-awaited characters from Orange Juice's games have made their way into 100% Orange Juice, in version 1.27 ~ Playground!

The Tsih & Tequila Character Pack is now available on Steam with a -10% launch discount. The pack contains Tsih (from Sora), and Tequila (from Flying Red Barrel), who both come with voices included!

New event is now live until July 10! Join an exciting new adventure full of sweat, tears and friendship, written by Hono of Orange Juice, and unlock exclusive new rewards by defeating an unexpected foe in a series of minigames!