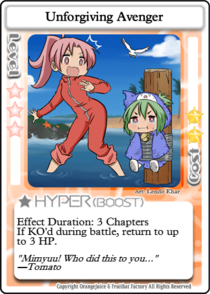 Effect Duration: 3 Chapters
If KO'd during battle, return to up to 3 HP.
Hyper Info
Effect Type
Boost
Level
3
Cost
20 ★
Symbol
[[File:|30px|link=]]
Illustrator
Lendo Khar
"Mimyuu! Who did this to you..." ―Tomato

Unforgiving Avenger is a hyper unique to the avenger role in Co-op Mode. The player can substitute it for their character's hyper card after reaching level 5 with the avenger role. It is a Norma 3 boost card that effectively gives the user the effects of an upgraded From Beyond. If the user is KO'd in their next battle, they will instead return to 3 HP.

Unforgiving Avenger is designed to synergize with the avenger's passive ability, allowing them to take massive amounts of damage in order to counterattack with a massive ATK boost. This card is best used by characters who have good stats for the avenger role, but have a hyper card that does not synergize with its playstyle or is too restrictive to use. An example would be Kiriko. The opening to use

Final Surgery is very narrow, with it only being useful while one or more players are at 1 HP. Some players may prefer to have another way to use From Beyond in the late-game for a final damage push rather than

The downside to using this hyper card is that it will replace a character's existing Hyper. Many characters that do well in the avenger role already have comparably strong hyper cards that they may prefer over this one, such as Miusaki's