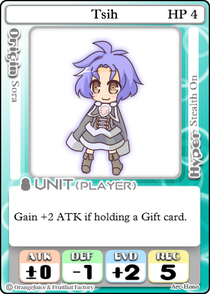 Tsih (ツィー Tsī) is one of the playable characters in 100% Orange Juice!. She was added to the game in DLC 17 alongside Tequila. She originates from the game Sora in which she was fought as a boss.

A warrior with a deceptively childish personality, Tsih is an aggressive soldier, with a love of crushing her enemies with rocks. Tsih features stats very similar to Suguri with a health stat of 4, a slightly below-average defense stat, and a powerful +2 evasion stat. This renders her somewhat fragile but provides her with a fair amount of survivability thanks to her high evasion stat. It can also enable Tsih to dominate defensive characters such as Fernet and Kyoko, as she will more than likely be able to deal damage and evade their counter-attacks, thanks to their negative attack stat. Tsih should generally not have much difficulty dealing with

Encounter panels, either. Although she may be unable to defeat the opponent as a result of her neutral attack, she often will be able to escape without even a scratch. She can also take great advantage of

Rainbow-Colored Circle to dodge even the most vicious of attacks, like those of a boss. For Tsih to truly reach her full potential, however, she requires a bit more setup and luck. While Tsih possesses a neutral base attack stat, her passive enables her to gain an additional +2 ATK if the player is holding at least 1 gift card.

Price of Power and

Metallic Monocoque as both can be held indefinitely regardless of whether the player is KO'd and provide very little drawback. Theoretically, the absolute best cards for Tsih are either

Miracle Red Bean Ice Cream, as they can give her a frightening +3 attack, but these are often much harder to acquire. With a gift in hand, Tsih becomes a much stronger opponent, able to easily defeat

Encounter panels and deal comparable damage to opponents and escape. If the player is particularly lucky, they will receive a gift card as their starting card, enabling Tsih to steamroll the competition before they have powerful counter cards. The passive also has excellent synergy with her hyper card which enables the player to deal potentially devastating blows for a low price.

The main disadvantage to Tsih, however, is that when her passive is not active, she is a weaker Suguri with a weaker hyper. Without a gift card, Tsih becomes rather frail and vulnerable without the possibility of dealing much damage in retaliation. Being reliant on a gift card for +2 attack could be considered less dependable than playing a natural +2 attack character, like Tomomo. Another disadvantage lies in gift cards themselves. Of all the card types, gift cards are the least common, and the player can only at max bring 1 of each gift card per match. Most gift cards also carry the effect of preventing norma, like

Windy Enchantment and will need to be discarded if the player wishes to level up. Some gift cards also apply effects that might generally be considered too dangerous for the player such as

Poppo the Snatcher or other disadvantageous effects such as

Tsih's playstyle is heavily dependent on multiple factors. Once the player has a gift card, they will have the freedom to pick either stars or wins norma based upon the situation. If the player draws a gift card early on and is either against fragile opponents or on a field with numerous

Encounter panels, then wins norma may be very viable. However, if the player is up against stronger bullies such as Star Breaker, the player will want to avoid confrontation and instead use their hyper as a deterrent. The player should always focus on

Draw panels to ensure they have a gift card and, ideally, a hyper for the late game to use as a weapon or shield.