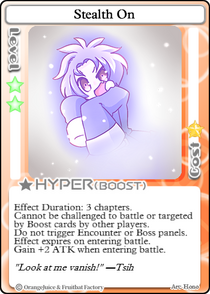 Tsih's hyper is Stealth On. When used, the user is given 3 stock of the effect. The unit cannot be challenged to battle by other players and is immune to boost cards that target the player (i.e. boost cards that bring up a prompt to select another player). The effect ends prematurely if the player enters a battle, and upon entering, the unit who played the card gains +2 attack.

Stealth On is a unique hyper that provides the player with both a shield and a potentially lethal weapon. For a cheap price, the player can create a 3 chapter barrier that, while active, prevents them from being challenged to a battle when another player passes. As to be expected, this can be particularly helpful in cementing victory or temporarily warding off pursuing bully characters. The hyper also prevents the player from being targeted by boost cards that select a specific character to target, which can be particularly useful against some hypers. The following boost cards can not be used against the player while under the effects of Stealth On:

The card's second effect is perhaps its most powerful, however. An extra +2 attack in battle can have a substantial effect on the outcome. Likewise, the previous effect may cause a pursuing opponent to pass the player, which will then enable them to attack the player with the stat boost. While this might not seem like much, the card is meant to work best with Tsih. Given that Tsih can already gain +2 attack from holding a gift card, pairing the hyper with her passive will give Tsih a massive +4 attack during the next battle that can often easily overpower opponents.

Like any hyper, though, Stealth On carries a few key downsides that greatly weaken its usefulness. Similar to

Solid Witch, there are numerous holes in the shield generated by the hyper, mainly those which are a result of indirect effects. While opponents cannot enter combat with the player by challenging her on the field, they can enter it indirectly through certain card effects. Cards such as

Assault among others will still result in combat. Perhaps worst off all, the hyper also does not protect against

Boss panels as they are not considered a challenge. As a result, the hyper will be relatively useless on a board with the BattlefieldBattlefield
Every 6 Chapters, all

Encounter panels. This effect lasts for 3 Chapters. field event. Likewise, boost cards that target players but do not bring up a prompt to select an opponent will still work when the hyper is active. Thus, cards such as

Flip Out will still work. Likewise, boost-type hyper cards that affect the player without targeting them, such as the debuff from

Blazing! or the star stealing from