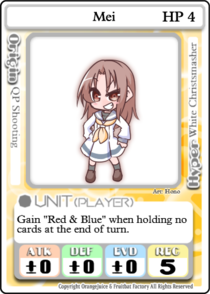 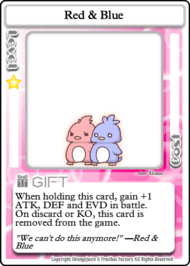 When holding this card, gain +1 ATK, DEF and EVD in battle.
On discard or KO, this card is removed from the game.
Level
1 ☆
Cost
0 ★
Limit
∞ per Deck
Deck Points

Mei (メイ Mei) is one of the playable characters in 100% Orange Juice!. She was added to the game in DLC 18 alongside Natsumi.

Red & Blue" when holding no cards at the end of turn.

Red & Blue: When holding this card, gain +1 ATK, DEF and EVD in battle. On discard or KO, this card is removed from the game.

An antagonistic and extremely competitive girl, Mei is always ready for a fight with whoever she deems as her nemesis, with the help of her penguins Red & Blue. Mei herself is a balanced character with a slightly below-average health stat and a neutral evasion, attack, and defense stats. However, she can lean towards being aggressive thanks to her unique passive, similar to Tsih. Whenever Mei has no cards in her hand, she will draw

Red & Blue, the most powerful stat-boosting gift card in the game, providing +1 to her attack, defense, and evasion stat as long as the card is held. This is extremely powerful, as it provides the player with completely positive stats and durability that is unequaled by rivaling attack characters such as Sora and Marc. Unsurprisingly the player should try to get Red & Blue the earliest they can, to keep Mei as strong as possible for as long as possible. If the player is lucky, this can sometimes be accomplished by starting with a zero cost card they can play immediately, like

Flip Out. This need to zero out the hand also makes Mei one of the few characters who can benefit from

Scrambled Eve, as she will always get Red & Blue back after its activation. With a bit of luck, she can even draw the one sent back to the deck, providing her with two copies of the card. Once the player has the gift card, Mei will generally not have much difficulty defeating

Boss panels, as her attack will either be enough to defeat the opponent or her defense and evasion will protect her from both high and low rolls. As a result, depending on the player's performance, they can use Mei to fulfill either norma as she can fight well or defend herself and collect stars. Also, if the player has Red & Blue, in their hand, while Mei has her hyper in hand, the player will have access to a powerful hyper than can be used to punish players for coming near her.

The inherent disadvantage of Mei's kit is her reliance on

Red & Blue. Without the card, Mei is a weaker QP that should avoid battle, and if Mei is KO'd the player will lose the card. This means unlike most of the cast, the player will generally want to keep a very small hand at all times in order to get the card back should they lose it. However, this may not be possible, especially if the player is holding cards like

For the Future of the Toy Store which can be very hard to discard. This can also make it very hard to plan a powerful play for Mei, as the player must always plan to be able to empty their hand in a moment's notice if they must. Consequently, Red & Blue is also an inconvenience. Since it must always be held to reap the full benefits of Mei, the player will only really have 2 card slots to work with instead of 3. Likewise, if the player loses Red & Blue, Mei's hyper also becomes substantially worse and will often need to be used just to remove it from the player's hand. In short, discarding Red & Blue will set the player back in the game and it may be quite hard to make a comeback after it is lost. Thus, while Mei can battle with the likes of Star Breaker the player should try to distance themselves from powerful bully characters when their hand is full to avoid losing Red & Blue.

As previously stated, Mei can potentially play for either wins or stars dependent on how well the player rolls and if they get her passive gift card quickly. If the player is lucky enough to get the gift, do well on

Encounter panels, and KO an opponent with her hyper, then wins can be viable. If RNG is not on the player's side, however, her stats should support her well enough that the player can collect stars in peace and counter-attack well in response to opponents. Overall, Mei is used for star norma more often than not, but wins norma can sometimes be used for norma 2 and 3 during the course of the game. 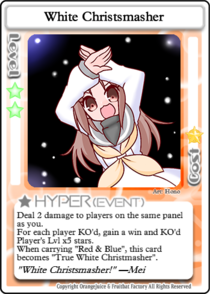 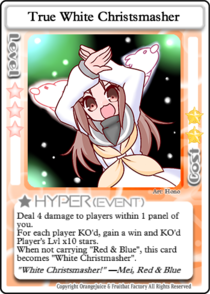 Mei's hyper is White Christsmasher, which deals 2 damage distributively to all players in the same panel as her, and gains the KO'd character's level x5 stars and 1 Win.
Mei also has an unique gift card called Red & Blue, which causes her to gain +1 ATK, DEF and EVD, and once discarded or KO'd, the card will drop from your hand.
Having both previously mentioned cards on your hand at the same time will turn White Christsmasher into True White Christsmasher, which operates similarly to its previous version, but now the attack expands to players 1 panel away from you, and gains double the amount of stars (Player KO'd Level x10)

White Christsmasher is a situational hyper but can lead to decent rewards. To break even, a player would have to knock down one Level 2 enemy, or two Level 1, making it a very useful card in the late game, were the player to land on the same panel as someone that is low on HP. Another good use can be to knock down any pursuers that Mei has managed to hold off and bring down to 2HP, shaking them off and getting rewards as a bonus.


Red & Blue is a very important card for Mei, since it allows her to boost her base stats by an important amount enabling her as a more combat oriented character. As such, the player holding this card should be very careful of any card dropping effects such as

Scrambled Eve. However, these cards are also useful when the player doesn't have this card, to get rid of their current hand and instantly obtaining it. Holding this card will also allow Mei to obtain True White Christsmasher, which is an improved version of her original Hyper card. Thanks to the extra range, this card can be used to take down any risky characters that could bring her down without having the necessity to land on the same panel.

In Co-op mode, Mei doesn't change at all, as her recovery stat does not rise nor is her hyper price or effect (with the exception that it cannot harm friends).

Red & Blue, attacker can be one of Mei's better roles, as her increased defense and evasion make a nice accompaniement to a +3 ATK. Unfortunately, however, her viability is hindered by her low HP and potential to lose her +1 stats, thus it will likely be beneficial for another player to play as guardian or supporter to help keep Mei in good combat-ready condition.

Similar to attacker, with

Red & Blue in hand, mei can be a decent guardian, sporting a +3 DEF, which will enable her to survive hard blows from the boss. She is not a great choice, though, as her HP is low, providing few shields, and if she is KO'd, she will lose her +1 stats. The player would need a supporter ally to be around at all times, which is problematic as the attackers and avengers will likely need their assistance more.

Supporter is not a great matchup for Mei, as she doesn't have any heavily increased stats on her own, her passive gift gives limited protection and will drop if she is KO'd. While the role does provide a +1 evasion boost, it will not increase the her survivability much during the late game, and the player will suffer from Mei's lack of damage output.

Given her low HP pool, Mei is not an ideal candidate for an avenger. Even when holding

Red & Blue, Mei will not be able to take much damage, and as a KO will result in her losing the card, it will likely not pay off for the player. While the role does provide a +1 evasion boost, it will not increase Mei's survivability much during the late game, and her lack of damage output will more than likely hinder the player's progress.

As noted by her rank, one of Mei's best roles is as a dealer. While a bit hard to accomplish, this mainly stems from the ability to give

Red & Blue to other players, which can be particularly potent on attackers. Some notable combos for this are attacker Tsih who can wield a permanent +5 ATK and +3 EVD thanks to her passive, Nath, who once powered up with Active Extensions can have a whopping +5 ATK +4 DEF and +4 EVD, and attacker Tomomo (Sweet Eater) who can have a frightening +6 ATK. Otherwise, it can pair decently with most other characters, however, there are exceptions. The card can be problematic for characters like Kae who need a negative defense, and avengers, as they need to take more damage, and thus a defense boost may pose a problem.