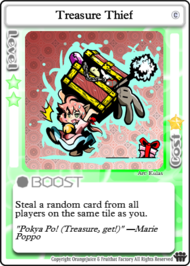 Steal a random card from all players on the same tile as you.
Level
2 ☆
Cost
10 ★
Limit
3 per Deck
Deck Points

Treasure Thief is a 2-star boost card that steals a random card from each unit on the same panel as the user. Units that are KO'd are affected by Treasure Thief.

Treasure Thief allows the user to steal cards from other players, but with a catch. The card is stolen at random and it will only affect units on the same panel as the user. This is used on players in both normal and co-op mode. Although it can be difficult to play, Treasure Thief can potentially turn the tide of a game by stealing multiple cards from other players, potentially including hyper cards. The most common way for this to happen is after an opponent attacks the player. During the player's next turn, they will be able to use Treasure Thief to steal a card from their attacker before escaping. Tanks such as Fernet can use this card to disarm attackers of their battle cards or potentially steal a healing card from them. Another common situation is when the player attacks and KOs an opponent. Even if the opponent revives, they will have to wait until the next turn to move (excluding Tomato and Mimyuu), allowing the user to steal one of their cards. As such, offensive characters like Kai and Yuki can use Treasure Thief to set their victims back even more after a KO. Kyousuke can take advantage of Treasure Thief both situations while being fairly indifferent to the effects of it himself.

Despite its potential, Treasure Thief is a card that can be hard to use due to its limited range. Characters that want to keep their distance from their opponents like Aru or Saki can have difficulty using this card, as their only opportunity to do so puts them at risk of being attacked. Characters with highly valuable hyper cards like

Red & Blue should also consider the risks of adding this card to the deck.

The card can be combo'd with

Party Time to steal up to 3 cards with one use. However, this is a risky play as not only would you depend on someone else to use Party Time, but there is the possibility of this strategy backfiring if an opponent draws Treasure Thief before you can. If you have already drawn Treasure Thief though, it may be worth it to wait for Party Time to be used if you know it is in the deck.