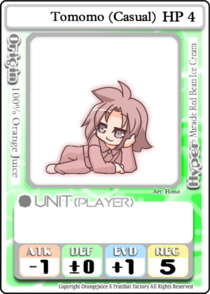 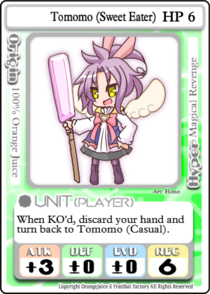 For the alternate version see: Tomomo.

Tomomo (Casual) / Tomomo (Sweet Eater) (トモモ（すっぴん）Tomomo (Suppin)/トモモ（スイートイーター）Tomomo (Suītoītā)) is a playable character in 100% Orange Juice!. She was added to the game in DLC 15 alongside Yuki (Dangerous).

Tomomo (Sweet Eater): When KO'd, discard your hand and turn back to Tomomo (Casual).

Tomomo (Casual) is an extremely unusual character in that she is two very different characters and similar to Nath, requires setup to reach full strength.

Tomomo (Casual) is the base form of the unit, centered around survival. In Casual form, Tomomo is fragile and frail with a below average health and defense stat, and a slightly increased evasion stat. With her weak stats and low HP, Tomomo (Casual) will generally need to avoid combat with other players and

Encounter panels. The player's primary focus should be on

Tomomo (Sweet Eater) is the transformed version of Tomomo that replaces the Casual form once the player activates her Hyper,

Miracle Red Bean Ice Cream. In Sweet Eater form, Tomomo is a bully with incredible stats, featuring a massive health pool rivaling most tank characters and the strongest attack stat in the entire game, a +3. With such powerful stats, Tomomo (Sweet Eater) can easily dominate the game, with or without battle cards, if the player can successfully keep her alive.

Even with her powerful Sweet Eater form, Tomomo is disadvantaged in a multitude of ways, most of which stem from her primary form. In her Casual form, Tomomo is often bullied heavily as a result of her weak stats, and she will generally be targeted, the moment she draws a

Miracle Red Bean Ice Cream. This ties into her second disadvantage in that if the opponent KO's her in Casual form, she will discard her Hyper, resulting in the player needing to draw another one. This can be difficult to do, considering that there are only 8 Hyper cards of the 48 cards in the center deck. Perhaps the worst disadvantage, however, is Tomomo (Sweet Eater)'s passive ability which causes her to drop all cards in hand, revert to Tomomo (Casual), and contend with a Recovery stat of 6, essentially leaving the player in the most vulnerable state possible. 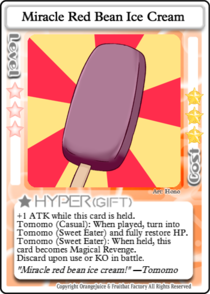 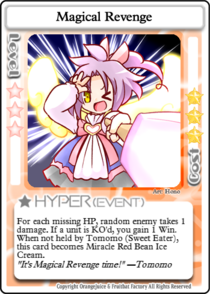 Tomomo (Casual)'s hyper is Miracle Red Bean Ice Cream. When held, the unit gains +1 ATK until the card is discarded. Getting KOed through battle will remove this card from the player's hand. Additionally, when played by Tomomo (Casual), she will transform into her powerful Sweet Eater form and immediately recover to full HP. When Tomomo (Sweet Eater) holds this card, it transforms into Magical Revenge.

While Miracle Red Bean Ice Cream is not a particularly powerful card in its own right, its ability to transform Tomomo (Casual) into Tomomo (Sweet Eater) usually makes it incredibly central to her general gameplan. It can often be detrimental to draw too early, as Tomomo (Casual)'s poor HP makes her fairly easy to wear down and KO in battle in order to forcibly discard her hyper before she can use it. Due to this, it can be effective to avoid

Draw panels until Norma 3 to avoid painting a target on yourself. Once drawn it is generally a good idea to use it immediately to avoid a premature KO, however it can occasionally be worth waiting a chapter or two to take damage from a Bomber or Air Raid field event as it will be healed upon transforming.

Passionate Research is useful for all characters with powerful hypers, but Tomomo (Casual) in particular can hold onto it to draw hypers without making herself a target.

Tactical Retreat can also be used to avoid battles that could thwart Tomomo (Casual)'s transformation.

Price of Power can be used to transform early at Norma 2, though the 35 star cost still makes this difficult.

Magical Revenge is a powerful but risky hyper; the damage it can deal and the wins it can grant can be game-changing, but Tomomo (Sweet Eater) does not particularly like being at the low HP required to make use of it, so the hyper is somewhat of a double-edged sword. One potential use is to use it to try and weaken a target before attacking them - this makes it more likely for Tomomo (Sweet Eater) to attack and KO her target without getting counterattacked, useful for landing on a home panel at low HP, but the random target selection makes it inconsistent in this regard. The hyper can also be useful if Tomomo (Sweet Eater) is getting bullied by another player; it's likely that both players will be left at low HP from a single encounter, making it more likely for the hyper to KO her attacker before they can attack again. This can buy her enough time to heal or complete a norma. In any case, as Tomomo (Sweet Eater) discards her hand upon KO anyway, there's little reason to hold off using it in such situations.

Sealed Guardian are useful for bringing players to 1HP where Magical Revenge only needs to hit once to score a KO, though the latter puts Tomomo (Sweet Eater) at risk of a KO herself.

Bloodlust will restore all missing HP when Magical Revenge is used, however Tomomo (Sweet Eater) should generally avoid cards that deal self damage as she is put in a highly disadvantageous state if KOed.