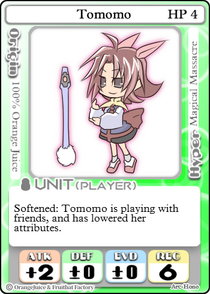 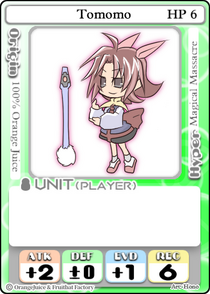 Tomomo (トモモ Tomomo) is one of the unlockable characters and the main antagonist of 100% Orange Juice!, featured as the final obstacle to overcome at the end of every Campaign.

Tomomo is a combat-ready character that when in her un-softened form has the highest overall character stats in the game. While similar to Yuki and Star Breaker, Tomomo features the drawback of an increased recovery stat like Store Manager and other bosses. As to be expected from a final boss, Tomomo features one of the most powerful attack stats providing her with a massive combat advantage. Tomomo's only true weakness lies in her increased recovery stat and less than powerful hyper which can effectively slow her down.

As a result of her extremely high stats and lack of any weakness in Campaign mode, Tomomo has "Softened" passive ability in multiplayer that reduces her stats for balance. While Tomomo retains her attack advantage, her +1 evasion is reduced to 0, and her health stat is reduced from 6 to 4. This greatly reduces Tomomo's survivability, as although she has the advantage of having no decreased evade or defense stat, unlike Yuki, her reduced health makes her much more fragile if she rolls poorly, which creates a bad combination with her increased recovery stat.

In her un-softened state, Tomomo is the absolute strongest character in the game boasting one of the highest attack stats, above average evasion, and a health stat that rivals most high-health characters. With no weaknesses, Tomomo can play for either stars or wins without much fear of being KO'd except by poor player rolls or powerful opponent attacks. If the player chooses to use Tomomo in a campaign or in a single player game, she will retain her un-softened stats.