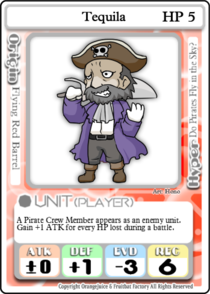 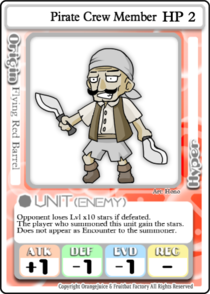 Tequila (テキーラ Tekīra) and Pirate Crew Member (海賊子分 Kaizoku kobun) are one of the playable characters in 100% Orange Juice. They were added to the game in DLC 17 alongside Tsih.

Tequila
A Pirate Crew Member appears as an enemy unit. Gain +1 ATK for every HP lost during a battle. (Effect is not persistent. Effect works based on health lost in each battle and only lasts for that battle.)

Pirate Crew Member
Opponent loses Lvl x10 stars if defeated. The player who summoned this unit gain the stars. Does not appear on

Encounter panels to the summoner.

Tequila is a unique character that has 2 powerful passive abilities. His first is his ability to cause Pirate Minions to appear through encounter panels. This passive works even if he is KO'ed! Take note that if 2 or more players are using Tequila, Tequila can run into other Pirate Minions from the other Tequila players. His other passive is the ability to gain attack in battle as he loses health. Due to his -3 EVD stat & 5 HP, Tequila can intentionally evade lower attacks to guaranteed he takes damage & deliver a powerful counterattack. Because of his extremely low EVD, he is better suited as a defensive character, rather than an aggressive bully.

While his low EVD is beneficial at full health, it's a death sentence when at 1 HP. Tequila also doesn't fare as well against random encounters & bosses due to his neutral attack & inability to attack second.

Pros
+Less reliant on attack-boosting battle cards than most units
+Gets an extra +1 ATK when using his signature card Big Magnum
+Low EVD combined with his passive means he can intentionally evade against survivable attack rolls for a massive attack boost.
+Summons Pirates who can earn stars for him simply by existing in the game
+Pirates don't give any stars when defeated, so opponents will get less stars from Encounter panels on average

Cons
-One of the worst REC stats in the game.
-Almost guaranteed to get KOed at 1 health on defense due to -3 EVD
-Passive only comes into play if he attacks second (unless Battle cards are used)
-Pirate Crew Members are frail & tend to die quickly, making it easier for opponents to earn wins
-Hyper doesn't summon as many traps as other Trap-placing Hypers 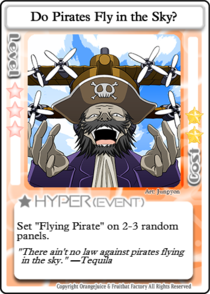 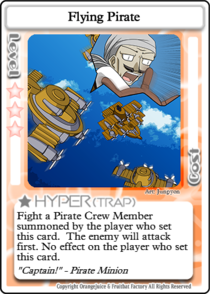 Tequil's hyper is Do Pirates Fly in the Sky?. When the Hyper is used, it causes 2 to 3 Flying Pirate to be placed randomly on the field. Landing on the trap card starts an encounter with the player who stepped on the trap against a Pirate Crew Member, who will attack first. If Tequila lands on his own trap, his hyper will activate, but will have no effect.