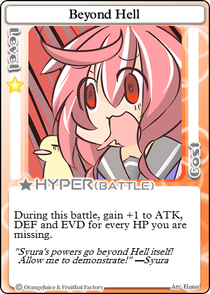 During this battle, gain +1 to Attack, Defense and Evasion for every HP you are missing.
Hyper Info
Effect Type
Battle
Level
1
Cost
0 ★
Symbol
[[File:|30px|link=]]
Illustrator
Hono
"Syura's powers go beyond Hell itself! Allow me to demonstrate!" ―Syura

Beyond Hell gives Syura the ability to deter people from attacking her while she is low on HP by giving her one battle where she can effectively dodge and attack. It's also useful on stages that reduce HP through the Air Raid field event or against opponents who have lower attack, such as QP. It is directly countered by indirect damage that would effectively KO Syura, like

Note that while you can still use the card at full HP, doing so grants no benefits. Also, the defense bonus is meaningless while you are at 1 HP, as attempting to defend will result in being KO'd regardless.

Tragedy in the Dead of Night or

Gift Exchange, especially if Marie Poppo, Fernet, or Kyousuke are opponents. Their higher maximum HP allows them to make better use of this Hyper than Syura herself while they're low on HP; the latter two can effectively tank until they're at 1 or 2 HP to make the most of it.