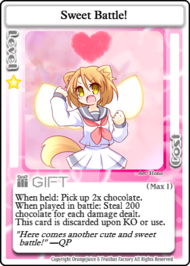 When held: Pick up 2x chocolate.
When played in battle: Steal 200 chocolate for each damage dealt.
This card is discarded upon KO or use.
Level
1 ☆
Cost
0 ★
Limit
1 per Deck
Deck Points

Sweet Battle! is a special Gift card that is automatically placed in the center deck during the Chocolate for the Sweet Gods event. A total of 6 copies are added per game, giving the deck a total of 54 cards instead of the usual 48.[1] Similar to

Awakening of Talent, Sweet Battle! is unique in that it is technically a 2-type card that can be held normally as a Gift or used as a Battle card.

The card itself is only present during the event as its sole purpose is for collecting chocolate. As a gift, the card is greatly advantageous as it can easily help a player achieve around 5,000 chocolate per game when held, especially on larger boards. It should be noted however that the card effect does not stack, thus holding 2 will not increase the amount of chocolate picked up. The card is also very effective as a Battle card. Dealing at least 1 damage will give the player 200 chocolate, thus even if the player only deals 2 damage, they will still receive a good amount of chocolate. If the player is going to be KO'd, they might as well use the card in battle if they have no other, as they will lose it if they are KO'd anyway.

As a card, Sweet Battle! is not disadvantageous to any character, as it multiplies chocolate pick up when held, and when used as a Battle card, does not provide a stat buff of any kind. As a result, if the player wants to use the card aggressively, they will have to use an event card or Hyper that boosts stats like

Super All-Out Mode before using the card in battle. Given that chocolate is not required to win however, it may be best to simply hold the card rather than use it in combat.

Characters that receive a notable edge from the card include Nath, Tsih, Mei, and Nico. Since Nath requires Battle cards to activate her passive, the addition of 6 Norma level 1 cards can quickly help her begin stacking Active Extension. Mei can easily discard the card to get Red & Blue faster, Tsih gets free +2 attack since it is a gift card, and Nico gains bonus stars since it's a gift card. Store Manager can also use the card during battles as it counts as a gift.