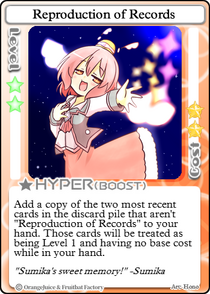 Add a copy of the two most recent cards in the discard pile that aren't "Reproduction of Records" to your hand. Those cards will be treated as being Level 1 and having no base cost while in your hand.
Hyper Info
Effect Type
Boost
Level
2
Cost
20 ★
Symbol
[[File:|30px|link=]]
Illustrator
Hono
"Sumika's sweet memory!" - Sumika

Cards copied by Reproduction of Records will be treated as having no cost and being Level 1, however, any cost specified in the effect of the card, such as

Tactical Retreat, will still be paid. If

Gift Exchange is used, any card copied with the hyper will return to its original cost and level, even if it stays in the player's hand. However, in contrast, if the card is taken using

Tragedy in the Dead of Night, the card will not return to its original cost and level. Cards that transform into another card passively, such as

Angel Hand will stay with no cost and Level 1, while cards that transform into another card by an active effect, such as

The discard pile is an invisible pile in which any card that is from the deck goes after being used or discarded. Cards that aren't originally from the deck, such as the battle card played by

Observer of Eternity or

Star Blasting Fuse, or cards from the TreasureTreasure
At the start of every Chapter places a chest on a random panel (up to board size limit). Stopping on the panel with the chest will the give the player its contents.

Gives stars equal to the current number of Chapters.

Gives a random hyper card. or MinelayerMinelayer
Every 3 Chapters, a Trap Card will be set on a randomly determined panel. These Trap Cards are not affiliated with the Center Deck, and will therefore not return to the Center Deck afterwards. The cards include:

Mimyuu's Hammer field event aren't sent to the discard pile, as they aren't from the deck. It should be noted that some cards such as

Branch Expansion Strategy do not transform any cards, and instead discard the whole hand and create new cards that won't be sent to the discard pile, while others such as

Magical Inferno and use them for free if timed properly. The hyper, however, requires understanding how the discard pile works, and tracking discarded cards as well as used cards. The main problem with Reproduction of Records is that it relies on other players. If the user discards a card to try to copy it on the next chapter, the other players might discard or use cards to make the desired card not be copiable. Likewise, if the other players don't use any strong cards, the hyper most likely won't make an impact on the game. The user also doesn't know what cards the opponent discards, so they might have no information on what is in the discard pile sometimes. However, some cards can provide the player with discard pile information such as

Sealed Memories, as they let the player know what an opponent discards.