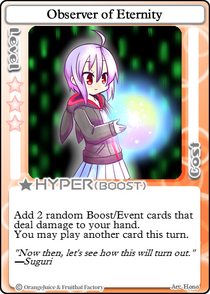 Suguri (46 Billion Years)'s Hyper is Observer of Eternity. When used, the player will generate 2 random damage-dealing Boost/Event cards, which will be instantly added to their hand.

The Boost/Event cards which can be generated by this Hyper exactly matches the list of cards that Suguri (46 Billion Years) can double the damage of with her passive effect. This means that cards such as

The cards generated by Observer of Eternity are created anew rather than being drawn from the deck, meaning they are removed from the game upon use, rather than entering the discard pile.