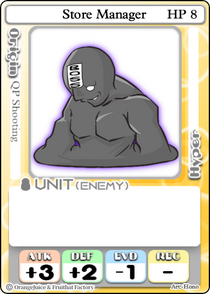 Store Manager (店長 Tenchō), boss variant, is one of the bosses on boards in 100% Orange Juice!.

Store Manager is the Boss with the highest attack stat in the game. As a boss, he features an increased health, attack, and defense stat, and an evasion stat equal to his playable counterpart. This makes him extremely dangerous to approach, unless the opponent possesses a high defense stat. When low on health, he will usually manage to evade attacks by other players thanks to his superior evade stat compared to other bosses, which can make taking him down a difficult task. If the player fighting him wants to survive, it is more than recommended to bring cards that increase defense stats, while they should also be ready to land the final blow when he is low on health by using an offensive card.