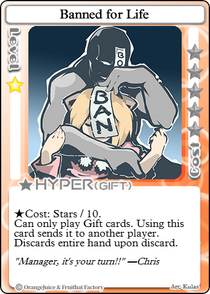 Store Manager's hyper is Banned for Life, a Gift card that makes the player holding it only be able to play Gift cards. Using the card will send it to a random player for a tenth of the user's stars. If the card is discarded, all of the players cards on hand will be discarded as well.

Banned for Life serves two main purposes. The first one is that it can be used to prevent a player from using a powerful card, like such as a Hyper. If Manager recognizes another player possesses a Hyper Card, he can deny their use and be able to attack them safely. Its second use is making someone drop their entire hand, including Store Manager. Its recommended the player keeps the card on their hand, since it's one of the few cards that allows him to drop his entire hand with minimal damage.