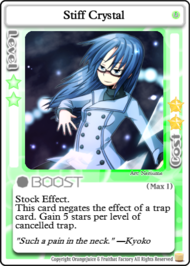 Stiff Crystal is a 2-star boost card that negates the next trap the user lands on. Instead, they receive 5 times the level of the trap in stars.

Stiff Crystal is an effective counter to trap based strategies, particularly against characters with powerful trap hypers. Saki and Chicken like to place their traps on home bases whenever possible to deny normas and afflict opponents with their debuff respectively. Just about any character can do the same with

Sky Restaurant 'Pures', so having Stiff Crystal available greatly decreases the chances of the player having a norma denied by a trap card. While it does refund stars when a trap is destroyed,

Sky Restaurant 'Pures' is the only card capable of refunding the whole cost of Stiff Crystal. As such, the refund is mostly to make sure that players don't play Stiff Crystal without reason due to the high 20 star cost.

Piggy Bank, so the player may not want to run both cards in their deck.