From 100% Orange Juice Wiki
(Redirected from Stealth On)
Jump to: navigation, search
Tsih 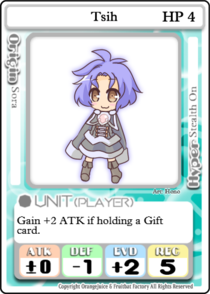 Tsih (ツィー Tsī) is one of the playable characters in 100% Orange Juice!. She was added to the game in DLC 17 alongside Tequila.

Gain +2 ATK if holding a Gift card. (Only applies for 1 Gift card)

Tsih is a risk based character built around an unusual passive ability and a very high evasion stat. Similar to Suguri in all aspects but with a neutral attack stat, Tsih shines brightest when her passive is put to use. By holding a gift card such as

Price of Power, or

Windy Enchantment, Tsih effectively becomes a stronger Suguri, with an attack stat similar to most bullies. If the player is particularly lucky, they will receive a gift card as their starting card, enabling Tsih to steamroll the competition before they have powerful counter cards.

The main disadvantage to Tsih, however, is that when her passive is not active, she is a weaker Suguri with a weaker Hyper. Without her passive, Tsih becomes rather frail and vulnerable without the possibility of dealing much damage in retaliation. Being reliant on a gift card for +2 attack could be considered less dependable than playing a natural +2 attack character, like Tomomo. Another disadvantage lies in gift cards themselves. Of all the card types, gift cards are the least common, and the player can only at max bring 8 gift cards per match. Most gift cards also carry the effect of preventing Norma, like

Windy Enchantment, thus they will need to be discarded for the player to Norma. 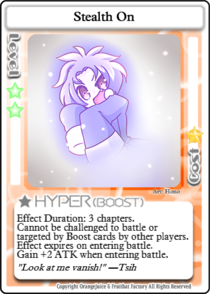 Tsih's Hyper is Stealth On. Stealth On gives Tsih immunity to player encounters or Boost cards that target (this means boost cards with arrow character selection).

Stealth On is a protective Hyper similar to

Crystal Barrier designed to keep Tish safe, however, similar to

Solid Witch, the barrier only protects against specific things. For a cheap price, the player can create a 3 chapter barrier that while active, prevents the player from being challenged to a battle when another player lands on the same panel. As to be expected, this can be particularly helpful in cementing victory or temporarily warding off pursuing bully characters. The Hyper also prevents the player from taking damage from boost cards that lock-on to a specific character. These include:

Like any Hyper, Stealth On, does carry a few key downsides that greatly weaken it's usefulness. Similar to

Solid Witch, there are numerous holes in the shield generated by the Hyper, mainly which are resulted by indirect effects. Boost cards that do not target Tsih specifically but indirectly target her will still work when the hyper is active. As a result cards such as

Flip Out will still work as they indirectly target the player. Likewise boost type Hyper cards that indirectly affect the player such as the debuff from

Similarly, the user is also not immune to indirect combat. While opponents cannot enter combat with Tsih directly, they can enter it indirectly through card affects. Thus cards such as

Assault among others, will result in combat. The Hyper also does not protect against

Boss panels as they are forced combats and not challenges to combat. As a result, the Hyper will be relatively useless against field events such as BattlefieldBattlefield
Every 6 Chapters, all