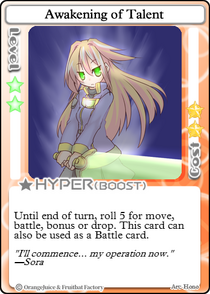 Sora (Military)'s hyper is Awakening of Talent. When the hyper is used, all rolls for movement, battle, bonus and drop will be 5, until the end of the player's turn. The card can be used as a Boost card or a Battle card.

Awakening of Talent is a modified version of

Extraordinary Specs that provides Sora (Military) with a powerful multipurpose tool that guarantees a 5 roll for all actions the player takes (excluding minigames). Unsurprisingly, the card is almost always used for combat as, with Sora (Military)'s base stats, the hyper will give the player a 6 for attack and evasion and a 5 for defense, which provides both a strong defense and offense. While this effect is slightly weaker than the one provided by Extraordinary Specs (which guarantees a 6 roll), it is slightly cheaper and provides more utility and combination potential thanks to it rare dual-type. The ability to use the card as either a battle or boost card enables more versatility. As a battle card, Awakening of Talent can be used as an emergency shield against attacking opponents or can be activated on the same turn as an event or boost card. To maximize output, the player will generally want to combine the hyper with event or battle cards that either maximize the roll or combat length. This might include cards such as

Big Magnum. Any of the cards stated will make it very difficult for the opponent to survive unless they have full HP and roll a high defense roll. The card is not limited to combat however as, under the right circumstances, it can be used as a makeshift

Lonely Chariot to reach a home panel or even win the game. The card can also be used to override other dice modifying effects such as

Despite its versatility and relatively low price, Awakening of Talent, is not a perfect card. The main drawback of the hyper is that, alone, its not incredibly powerful. While the hyper guarantees a roll 5, this translates to a total attack output of 6, which as previously mentioned is slightly less than the 7 granted by Extraordinary Specs. Unlike 7, a 6 can potentially be evaded by any character with at least a +1 evasion stat. Consequently, the player, more often than not, must combine the card with either an event or battle card or else the hyper will more than likely fail to KO the opponent, unless they are low on health or have neutral or negative evasion. As to be expected, this can lead to disappointing outcomes. Likewise, by using 2 cards, the player will generally have to target a player with 100+ stars to recuperate the star cost of the combo. This in turn, can potentially lock the card's usefulness until the late game, for better or worse.