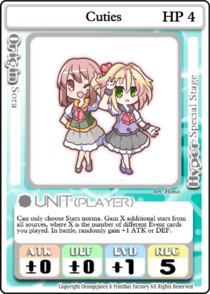 For the alternate version see: Sora, Sora (Military), or Sham.

Sora & Sham (Cuties) (ソラ＆シャム（アイドル) Sora & Shamu (Aidoru)), also referred as just Cuties, are one of the playable characters in 100% Orange Juice!. They were added to the game in DLC 21 and are both the first dual-character that does not feature any switch between the two characters and the first DLC to only feature a single unit. Sham and Sora both originate from the game Sora, where both were close friends before the start of the game.

Can only choose Stars norma. Gain X additional stars from all sources, where X is the number of different Event cards the player has activated. (The player will gain a stack of Events Crashed) In battle, randomly gain +1 ATK or DEF.

Ready to perform a live concert with music and dance, the Cuties are the idol version of Sham and Sora, featuring a mix of each other's original stats. A powerful duo, the Cuties feature a below average health stat of 4, a boosted evasion stat, neutral recovery, and passive that provides a bonus +1 buff to attack or defense randomly every battle. As a result, the player will essentially be using either Sora or Sham every combat phase, both of whom are strong characters. This provides the duo with both survivability through a boosted evasion and defense and a decent amount of attack power when they receive extra attack. Either way, the Cuties benefit greatly by having no negative stats to compensate for their lackluster health pool, making them a force to be reckoned with. The duo also has a powerful secondary passive which enables them to gain additional stars for every different event card the player activates, when they receive stars from any source. While the effect may seem minimal, it can enable the Cuties to amass stars quickly, as each chapter start will have an extra boost as will each

Bonus panel and card effect that grants stars. The stacks of Events Crashed also never deplete which makes the effect that much more powerful over time, especially if begun early in the game. The effect being based on event cards is also beneficial, as there are often multiple ones in the deck, and the player can bring weaker cards like

We Are Waruda to feed the passive with little risk to themselves. The Cuties also feature an extremely powerful hyper card this if used correctly can provide them with mountains of stars during the end game.

Boss panels, if the player does not receive +1 defense. Likewise, since the bonus stats are provided at random, they may not give the stat the player needs at the time such as defense during an assault and vice versa. Also, given that the stat boosts are only +1s, they may prove to give extremely exciting results or barely help at all depending on the player's luck. The Cuties also are unable to use wins norma which, while better than the alternative situation, can be a problem on boards like Tomomo's Abyss where combat and wins often plays a big role. 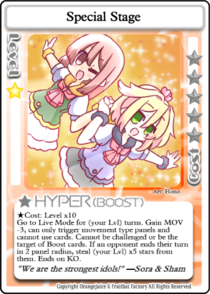 Go to Live Mode for (your Lvl) turns. Gain MOV -3, can only trigger movement type panels and cannot use cards. Cannot be challenged or be the target of Boost cards. If an opponent ends their turn in 2 panel radius, steal (your Lvl) x5 stars from them. Ends on KO.
Hyper Info
Effect Type
Boost
Level
1
Cost
Level x10 ★
Symbol
[[File:|30px|link=]]
Illustrator
Hono
"We are the strongest idols!" ―Sora & Sham

Cuties' Hyper is Special Stage. When activated, the unit will receive stocks of "Live Mode" equal to their norma at the time of activation. In this mode, the unit will be unchallengeable to battle but can challenge others, untargetable by boost cards, has a -3 movement roll, will only be able to trigger

Warp panels, and be unable to play cards. Opponents within a 2 panel radius of the unit at the end of their turn will pay the unit 5 stars for each of the unit's norma level. Either way, the longer the player can keep an opponent nearby, the more stars the player can steal

Special Stage is one of the greatest star draining cards in the entire game, with the possibility to steal even more stars than

Ubiquitous. Unlike Ubiquitous, however, the card requires more thought, as the timing of the card's activation will determine how well the card performs. In order to yield the best results from the card, the player will need to activate the card when opponents will be near the player soon. This can be accomplished by activating the card when there are KO'd players recovering nearby, when the player is heading down a path that their opponents must follow to get to their

Home, or by using the hyper on a compact/commonly crossed section of the board. While the hyper cannot steal from KO'd players, it can the moment they recover. Special Stage is also infamous on small boards like Vortex where the effect is almost impossible to dodge. The player can also use the card viciously on larger boards like White Winter where the long walk to a player's home panel can force the opponent to walk through the hyper to avoid missing their norma. In short, the goal of the player will be to steal from the opponent as many times as they can, which can only be accomplished if the player is already close by at the time of activation. Another great aspect of the hyper, is that it is very easy to make a star profit with the card, as the player only needs to steal from 2 characters or 1 character twice to recover the cost of the card. Better yet, the card is based on the player's level, not the opponents, and thus enables the player better control over the card's effect. The player can also take advantage of the invincibility the card provides if they wait until norma 4 to activate the hyper, as it will provide full protection from the

Boss panels for 4 turns. This may even give the player the opportunity to KO the boss if the other players have already faced it multiple times while the player was in Live Mode.

As to be expected, the card is far from perfect. The greatest disadvantage to Special Stage is the timing and luck aspect required to get the card to work well. If the player is particularly unlucky, they may time the hyper poorly enough that they don't make the cost back. Likewise, if the opponents role high or uses

Dash! they can easily escape the hyper's effect. Similarly, cards like

Here and There and field events like Random WarpRandom Warp
Every 5 Chapters, Each players will be warped to a randomly chosen panel at the beginning of the Chapter. can easily enable opponents to escape the hyper's range. Consequently, the hyper works very poorly on boards with an abundance of

Warp panels and can be hard to use on boards like Star Circuit where the panel spacing and lack of path diversity can make the hyper difficult to time well. In a different but equally poor scenario, if the player activates the card when they are at 1-2 HP, opponents may follow the player on purpose, accepting the star loss, but waiting for the stocks to run out so that they can KO the player and get their stars and more back. This problem is more common with bullies and in particular Star Breaker as the opponent will not care about stars as much.