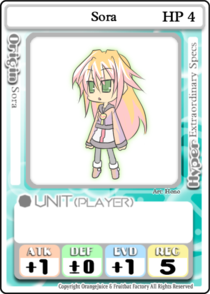 Sora (ソラ Sora) is one of the unlockable characters in 100% Orange Juice!. She originates from the game Sora in which she was the title character.

Like her friend Suguri, Sora is built around slightly buffed stats in both attack and evasion, which provide her with both a decent amount of survivability and attack power. Unlike the former, however, Sora does not feature a trade-off in defensive capability and carries the benefit of having all positive stats. As a result, she can play either an aggressive or passive role depending on the situation. Sora herself makes a very capable fighter with little to no weakness other than her slightly below average health. With her stats, she is able to deal solid damage, defend against strong attacks, and evade both weaker and powerful attacks if the situation presents itself. Likewise, Sora generally does not have any difficulty defeating

Boss panels as her attack will either be enough to defeat the opponent or her defense and evasion will be able to protect her from both high and low rolls. In the late game, Sora also boasts one of the most powerful Hyper cards in the game, which can help her deal guaranteed massive damage to any opponent, or on the flip side, survive almost any attack.

Even with her powerful build, Sora is not invincible, however. Like all below average health stat characters, she can only survive a few combats before being defeated. If the player consistently rolls poorly, her slightly buffed stats will not save her from numerous combats, and while she can hold her own against a boss, it is still generally not advised without her Hyper. Sora's slightly buffed evasion stat may also cause the player to take unnecessary risks that may result in Sora being KO if the roll result is poor. Like Saki, an additional point in evasion will often not protect the player, and without any kind of buff in defense, Sora will be at risk from high rolls.

Generally, Sora should aim for star norma but can easily switch back and forth between star and wins norma based on the player's performance during the game. With the right matchup and RNG, Sora can easily dominate wins. More often than not, however, Sora should generally be played with a mix of both passive and aggressive, taking opportunities to fight when they arise and avoiding combat when there is a better alternative. A

Bonus panel will usually be a better choice than an

Encounter panel, but Sora can easily handle an

Encounter panel over a

Drop panel, if the player only has these options. In the late game, her Hyper can also be used to gain more wins or stars, whichever the player has chosen. 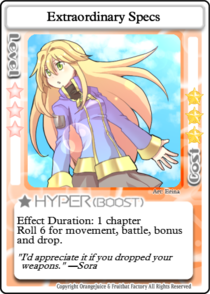 Extraordinary Specs is a powerful Hyper that greatly boosts Sora's movement and combat abilities. For the duration of the chapter, up until the player's next movement roll, all dice rolls are guaranteed to be perfect sixes. As a result, this enables Sora to effectively catch opponents, overpower them, and defend against them with guaranteed roll strength.

The hyper itself opens up tons of strategies for the player and can easily be combined with other cards to guarantee an opponent's defeat. Cards such as

Final Battle can force an opponent into a disadvantaged battle to the end. The player should keep in-mind, however, that these combos are extremely expensive ranging from 60-80 stars.

The main draw back of Extraordinary Specs is that the Hyper itself is costly and can only be used at higher levels. Also, even though the Hyper makes Sora throw max rolls, the Hyper does not guarantee the player will KO the opponent. This in turn can, lead to disappointing outcomes if the player does not use more cards, given the high cost of Extraordinary Specs. However as mentioned previously, using additional cards will further raise the already expensive price of using the Hyper.