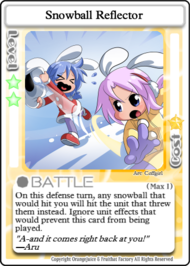 On this defense turn, any snowball that would hit you will hit the unit that threw them instead. Ignore unit effects that would prevent this card from being played.
Level
2 ☆
Cost
10 ★
Limit
{{{limit}}} per Deck
Deck Points

"A-and it comes right back at you!" ―Aru

Snowball Reflector is a special Battle card that is automatically placed in the center deck during the Santa Scramble event. A total of 4 copies are available per game, along with 4 copies of

Grown-up Snowball Fight. Originally, these cards were added into the deck, giving the deck a total of 56 cards instead of the usual 48.[1]. As of Version 1.31.4, they will instead replace two cards from each player's deck, keeping the deck at the usual 48 cards. Snowball Reflector is unique in that although it is listed as a Battle card, it is used only in snowball fights rather than battles.

Snowball Reflector can only be played during the defensive round of a snowball fight. When this card is activated, any snowballs that hit the user will be reflected back at the thrower, hitting them and knocking them out of the snowball fight. This can give you an edge in a situation when you're outnumbered, as it has a chance to reduce the number of attackers. It can also be used as a counter to

Grown-up Snowball Fight, by moving yourself into a corner to trick them into using Grown-Up Snowball Fight to get a guaranteed hit, then unleashing this card to take them out.