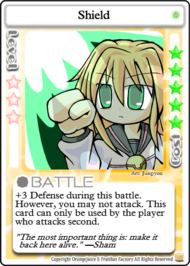 +3 Defense during this battle. However, you may not attack.
This card can only be used by the player who attacks second.
Level
3 ☆
Cost
5 ★
Limit
3 per Deck
Deck Points

Shield is a 3-star level defensive battle card that can aid the player in defending against large amounts of damage. Upon activation of the card, the player will receive an addition +3 to their defense stat for the duration of the battle. The card can only be used by the player who attacks second and the player will be unable to counter-attack.

Shield is a simple defense card that is best used either against opponents that deal large amounts of damage like Tomomo (Sweet Eater) or to boost the defensive ability of a character will low defense temporarily. Unsurprisingly the card works very well on tank characters such as Kyoko and Fernet who need to defend their HP and often don't deal much damage during their counter-attack anyway. In both cases, a +5-6 defense stat will enable them to handle even the strongest from opponent attacks using powerful combat cards such as

Another Ultimate Weapon, and others. Shield also has some special synergy with certain characters. Since it can only be used by the second attacker during combat, characters such as Sham will be able to use the card against bosses and Iru will be able to use it immediately after dealing 1 point of damage with her passive. The card can also theoretically be used for high evasion characters in the case of an emergency. For instance, if the player is using a character like Suguri and is afraid they will be KO'd from full health by the next attack, Shield may provide better, more certain protection, than the evasion stat. Shield can also be used specifically to counter Alte's

Self-Destruct, assuming the opponent attacks first. Since the player cannot counter-attack, they cannot cause a KO.

The main disadvantage of Shield is the inability to counter-attack after the card is activated. The card can save the player's life if they are low on HP, but will still leave them just as vulnerable against the next attack and not make the opponent any weaker. As a result, the card is somewhat overshadowed by

Shield Counter, the former of which is cheaper and still enables counter-attacking and the latter which cannot only completely cancel the opponent's attack but also deal damage to the opponent too. Thus, many players pick one of the other cards instead of Shield, when constructing their deck. The card also isn't particularly useful for some character such as Kae and Ceoreparque as a result of their passives.