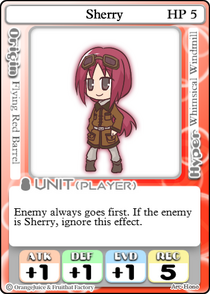 Sherry (シェリー Sherī) is one of the playable characters in 100% Orange Juice. She was added to the game in DLC 6 alongside Sham. She originates from the game Flying Red Barrel in which she was one of the many minor antagonists.

A calm and collected pilot who quit The Guild, Sherry is an experienced pilot with excellent play versatility. Sporting a health stat of 5, a neutral recovery stat, and above-average stats in attack, defense, and evasion, Sherry boasts a superior stat total to most of the cast that is only matched by fellow aviator Islay. Consequently, these stats enable Sherry to play both aggressively or defensively depending on the situation. Sherry should have little difficulty either defending or evading on

Encounter panels and KOing the opponent in response. She also shouldn't have much trouble surviving bosses. This can be beneficial over time as Sherry can potentially transition between wins and stars norma as needed based on the direction of the game. The most unusual aspect of Sherry, however, is her passive ability. In any combat Sherry enters, she will always be the defender and attack second. While this may not seem like an advantage on paper, it provides Sherry with utility not available to other characters. On

Boss panels, cards that can only be used when the player is defending can always be used, providing a massive boost to the player's survival potential. These battle cards are

Tactical Retreat. Similarly, these cards can be used to counter opponent's hyper cards late-game and can also be used to purposely land on a

Home panel by attacking and then ending the battle.

Sherry is not without flaw, however. Despite her strong stats, her passive can be troublesome. Since Sherry will more or less always attack second, she will always be prone to taking damage in combat. If an opponent rolls well, Sherry will be at risk of being KO'd before she can retaliate. An opponent with 1 health maybe even be able to KO her before she can attack. This can be particularly problematic for bosses at 1 health, given that they often roll incredibly powerful numbers that could very easily KO the player, even at full health. Similarly, if the player is particularly unlucky, other players may be able to KO Sherry, as a result of her passive. Another disadvantage of Sherry is that her hyper has very limited use.

Given the nature of Sherry's passive, there are some specific interactions the player should be aware of. There are only a few effects in the game that can override Sherry's passive. If Sherry uses

Rival or the co-op version of

Protagonist's Privilege, she will be able to go first in battle. Otherwise, Sherry's passive will override all other effects that would make her go first. This includes Iru's passive, meaning Iru will be forced to go first even if she initiates battle, granting Sherry total immunity to Iru's automatic 1 point of damage.

Like most characters in the cast, Sherry should generally aim for star norma, but she can play either wins or stars dependent on how well the player rolls and what they draw. If the player is having a good run, +1 attack can go a long way, and Sherry may eat up a lot of opponents and

Encounter panels. However, due to Sherry's passive, playing passively is generally more advisable than playing aggressively. The player should generally try to find defensive battle cards and healing cards toward the late game. Having these cards will allow the player to survive longer, mitigating the risk of dying and losing half her stars. The player should mainly aim for

Draw panels as opposed to

Pros
+Very strong base stats
+Can always use defensive battle cards, as a result of passive ability
+Not hyper reliant
Cons
-Susceptible to