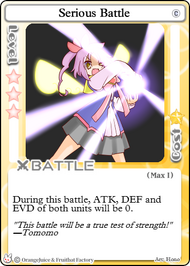 Serious Battle is a 3-star battle card that sets both player's ATK, DEF, and EVD to 0, ignoring any stock effects or passive abilities.

Serious Battle neutralizes all roll bonuses for both characters, making an effective tool for dealing with opponents with high base stats. Offensive characters like Tomomo and Star Breaker can be stopped dead in their tracks by playing this card, negating their offensive power and forcing them to rely solely on die rolls for the battle. Serious Battle can also be used to punch through the defenses of tanks and evasive characters, like Fernet and Suguri respectively, who rely on high base stats to reduce and negate incoming damage. The best abusers of Serious Battle are characters who have mostly negative stat modifiers, as it increases those stats in addition to the problems it causes for opponents. Natsumi, Iru, and especially Marie Poppo can all use Serious Battle to give themselves a fighting chance against characters that would otherwise obliterate or ignore them. This could also be used as a substitute to

The flaw of Serious Battle is that, despite giving many characters a large advantage, the results of the battle will still come down to a die roll. The battle can easily still go in the favor of the opponent if they roll well or the player rolls poorly. Since the effects of Serious Battle extends to battle cards, characters like Syura who have stat-boosting battle cards as their hyper can find their hypers countered by this card. Characters that depend on a particular stat, like Kyoko or Star Breaker, should never bring Serious Battle, as it can negate that advantage at the most inopportune times. In addition, characters with generally good stats across the board like Sherry or Islay will also suffer if Serious Battle is played against them. Nanako and Peat are perhaps worst off by Serious Battle being in the game. It negates their naturally good defensive stats as well as the boosts from

Blue Crow the Second, forcing them into dangerous situations and wasting a hyper card.