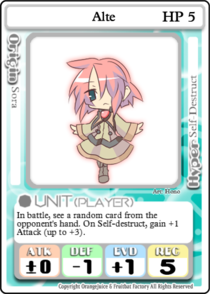 Alte (アルテ Arute) is a playable character in 100% Orange Juice. She was added to the game in DLC 5 alongside Kyoko

In battles, see a random card from the opponent's hand. On Self-Destruct, gain +1 Attack (up to +3).

Alte is an unusual character centered around a powerful Hyper and passive ability combo. Similar to Nath, Alte requires some setup to truly shine. When beginning a match, Alte starts with less than impressive stats, similar to Hime but without the ATK boost. As a result, the player may be bullied very early on, so the player should focus on reaching Norma level 3 and landing on either

Draw panels to secure a Hyper and stars to level up. Once the player has a Hyper, Alte's game more or less begins, as Alte's build is solely built around her Hyper. With each successful use of

Self-Destruct, Alte will gain a permanent boost to her ATK, that will make her more competent in battle. On the rare chance that the player manages to land 3 successful detonations, Alte's ATK will become the same as Tomomo (Sweet Eater). The Hyper will also result in large star losses for the opponent, which helps to push Alte further ahead.

Blue Crow the Second and respond with

The main downsides to Alte, however, are her extreme Hyper reliance and rather frail stats. Without her Hyper, Alte can be picked on easily if the player consistently rolls poorly for evasion or defense. If the player is unable to successfully draw a Hyper, the risk of Alte being KO'd will increase the more the match progress, especially if it becomes obvious to the opponents that the player does not have the Hyper. 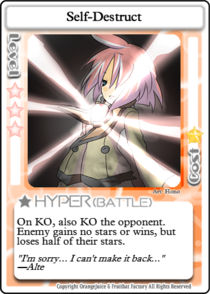 Alte's hyper is Self-Destruct. When the Hyper is used and Alte is KO'd the attacker will also be KO'd and lose half their stars. (If Alte is not KO'd by the attack, the card effect will not activate) Additionally, Self-Destruct will activate Alte's passive ability, giving her an additional +1 Attack (to a maximum of +3) for the remainder of the game.

KO'ing an enemy with Self-Destruct does not give any wins, and will not count as a KO for the purposes of any achievements or unlock requirements which involve getting KO's.

Self-Destruct is unique in the sense that it can reward the player for deliberately walking into a potential KO situation. If used well, it has the ability to both feed Alte's ability to attack as well as stopping the advance of opponents. As a Hyper whose effects only activate upon the user being KO'd, timing is crucial for the proper usage of Self-Destruct. Although using Self-Destruct from full HP may work in some situations, such as against bosses (particularly the Store Manager) and high-attack characters, more often than not using Self-Destruct from full HP will result in a wasted Hyper. Thus, it is critical that the player effectively manages her HP when looking to use Self-Destruct.

The main advantage that Self-Destruct has over any other Hyper is the unease generated by the card itself and its extremely cheap price. Opponents will often be wary of attacking Alte the longer the game progresses, as the risk of their assault backfiring will be ever present. This is a double edged sword however, since as a result, the player may have to try to initiate combat themselves and damage their own health. In many cases, HP depletion will naturally occur throughout the game via landing on

Encounter panels and using cards to aid Alte's endeavors. Cards such as

Cloud of Seagulls can be used to lower Alte's health, and cards such as

Gentleman's Battle can be used to force players into battling Alte.

The Hyper does feature a few disadvantages, however. Self-Destruct usually requires similar setup to

Final Surgery, in that the player will want to low their health as much as possible to guarantee their own death. Unfortunately, Alte's stats are not convenient for this task, as her low defense may KO her rather than reduce her HP, and her above average evasion, may cause her to dodge strong attacks, when the player intended for the opponent to KO them. The player may also never get to use the Hyper, as similar to Nath, players may actively avoid attacking Alte for fear of activating Self-Destruct, which is problematic if the player is behind in star count and needs to KO someone to have a chance. The player will also not be able to start using the Hyper until Norma 3, which gives the Hyper a late start unless

Price of Power is used.

A more unique detriment to Self-Destruct is that similar to

Solid Witch, there are a few characters and cards that can maneuver around it's effect. For instance, if NoName is not in NoName (Head) form Self-Destruct will not KO him or cause him to lose stars. Similarly, QP's

Dark Side of Business can also help the opponent easily bypass the Hyper.