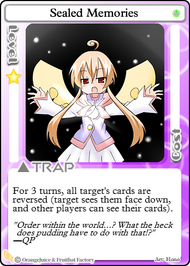 For 3 turns, target sees all cards face down, and other players can see their cards.
Level
1 ☆
Cost
0 ★
Limit
3 per Deck
Deck Points
N/A
Symbol
30px
Illustrator
Hono
Uncommon Card
Mixed Pack
"Order within the world...? What the heck does pudding have to do with that!?" —QP

Sealed Memories is a 1-star trap card that reverses all cards in the victim's hand for three turns. The victim's opponents will have full view of their hand while they themselves will be unable to see their hand for the duration. This includes any cards drawn after the effect is triggered.

Sealed Memories is effective card for hindering opponents from using their cards, or to simply warn of what cards they may have in their possession. The scouting utility of Sealed Memories makes it a great card for Mira. If the opponent does not have any problematic cards, Mira can easily catch up to and attack their target using their smoke passive or

Leap Through Space. Most terrifying of all is Sweet Breaker, whose passive triggers off of the cards reversed by Sealed Memories, giving her +1 to all her combat stats for each card in the victim's hand. Sweet Breaker can play this card alongside

Party Time in order to more easily catch opponents once they trigger the trap.

While Sealed Memories does provide the user with information, it is still a very low impact trap in the hands of most characters. Characters like QP or Fernet can benefit a little from knowing their opponents cards, but will generally be unable to make plays with said knowledge. In general, if the character is unable to capitalize on the confusion caused by Sealed Memories, then they are usually better off running other traps.