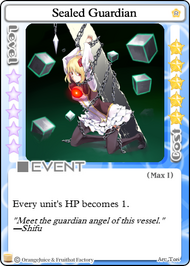 Sealed Guardian is a 5-star event card that reduces the HP of all units to 1.

Due to Sealed Guardian's high level requirement and star cost, it would be best not to directly use this card at full price unless the player is desperate for wins or as a last resort. Sealed Guardian is generally best used when combined with another card to reduce the star cost.

Play of the Gods, while luck-based, can enable this card to be played at level one for only ten stars.

President's Privilege can also be used to greatly decrease the star cost of Sealed Guardian. Iru can benefit from the effects of this card, as it allows her to easily snipe off opponents with her passive or

Extended Photon Rifle. Another very effective user of Sealed Guardian is Syura. Sealed Guardian will put her opponents in their most fragile state while Syura receives a massive power boost from her passive and

Beyond Hell, allowing her to pick up easy wins. Perhaps one of the most effective uses of this card is combining it with Kiriko's hyper

Final Surgery, which will allow her to KO all units and gain 100 stars.

If a cost-reducing card is not used, the price of Sealed Guardian can far outweigh its benefits. The massive 50 star cost makes it a huge gamble for any character to play, as failing to secure a KO will severely impact their progress towards star normas. Even worse, the player is at dire risk of being KO'd themselves from any counterattack. Characters with a negative ATK stat like Marie Poppo are particularly at risk due to the increased chance of their opponents dodging their attacks and KOing them. For the rest of the cast, positioning is extremely important can make or break a Sealed Guardian activation for them. Being in front of another character can spell certain doom for the player if they are not good at evading attacks.