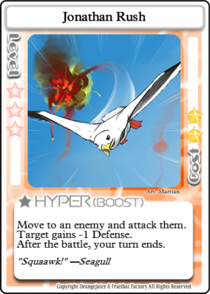 Seagull's Hyper is Jonathan Rush. When used the player may choose any non-KO'd character and move to their tile to attack them. The defending character gains -1 Defense for the duration of the battle. The player's turn ends after the battle, meaning the player will not activate the panel they have landed on.

Jonathan Rush allows the player to attack any player regardless of how far away they may be. As a result, a viable usage of this card is to pick off enemies with low HP. It is advised to combo this card with another attack-boosting card if dealing with characters with a high evade stat. Another use of this card is to move to a more advantageous position on the board, such as near the player's home.