School Crashers (2020 Rerun) is a rerun of the original School Crashers event that ran in 2018. The rerun offers an updated experience, with a selection of new cosmetics, new minigames that can be played on Playground panels, and new effects that can be earned from those panels. NoName parts are also more common than they were in the original event.

In one of many potential OJ parallel universes, Marc, Syura, Sora, & Peat are enjoying their school life at Ebimanyou Private Academy. That is, until an accident leaves their teacher, NoName, as a talking head! Will they be able to get NoName's body parts back from the rats that roam the school before they get expelled?!

The School Crashers event once again primarily involves use of the Playground! field event. This is a unique field event that sets several

Minigame panels across the board, which will trigger a minigame for any players who land on one. For the duration of this event, the Playground! event causes Minigame panels to spawn every 3 chapters instead of every 5. The panels can appear on any panel with exception of

Home panels and when active negate the effect of the panel they are on top of. Thus if a player lands on an

Encounter panel with a minigame panel over it, no encounter with a NPC will occur before or after the minigame begins. There are a total of 6 possible minigames triggered by these panel and each game uses special cards that grant the player an effect or reward upon completion.

The goal of these minigames is to collect the four missing parts of NoName's body which are dispersed amongst different minigames. NoName's parts can be found in any minigame. This includes 4 parts: His right arm, his torso, his left leg, and his right leg. If any part is present in a minigame (besides Whack a Poppo and Poppo March), NoName's head will appear on the wheel panel, card, or balloon to signify such. In the two mentioned mini-games, the player has a random chance to receive the part after winning the mini-game. The specific part that the player will receive is random. The parts can be found in both singleplayer (with the exception of campaign) and online games. It should also be noted that when one player gets the part, the other players will NOT get the part as well. Each player must win the part in their own minigame. The probability of a part appearing increases the more games are played without collecting a piece, and resets after a piece is collected.[1] If the player is using single player they should NOT press shift or control, as a penalty will be applied to the increase in probability.[2]

It should also be noted that if the player leaves mid-game (either due to quitting or lost connection) after winning one of NoName's parts, they will still keep the part without having to finish the game.

All minigames feature special punishment and reward cards for the player. In all scenarios with cards, if the player succeeds, the final card taken will be the effect the player receives.

The Drop Stars, Draw 2 Cards, and Joker effects are new to the rerun.

Track the Card is a classic card minigame similar to Match 2. When the player enters the minigame, they will be presented with 4-6 cards. The cards are shown face up for roughly 2 seconds and then flipped face down. The cards then scramble at a steadily increasing speed for around 6 seconds. The player will then need to pick a single card from the resorted cards, and they will receive the effect of whichever card they draw. The player's performance in this game is purely based on skill of the player's eyes, as the last second of the game is the most difficult to keep track of. No matter the amount of cards, the game is challenging, as more cards results in more distractions from the player's card, and less cards results in the cards moving more since there are less of them. 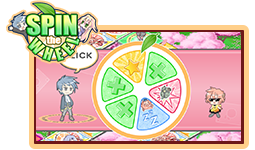 Spin the Wheel is another minigame that plays exactly like it sounds. When the player enters the minigame, they will be presented with a wheel that features 4-8 card effects listed on it. The player will have 10 seconds total to stop the wheel or the game will automatically stop it. The effect under the leaf when the wheel stops will be the one the player receives. Wheels come in 3 different speeds that determine when the player's click will register relative to the pointer leaf at the top of the wheel. The player should try to recognize the speed in the first 5 seconds of spinning and then use the proper action based on it (The rules apply for all wheel sizes) 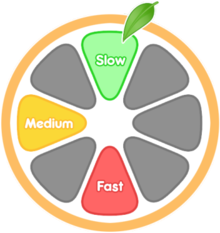 Rad Poppo color while avoiding Altes and Tomomos. Each Poppo is worth 100 points. If the player strikes an Alte, they will lose half of their points and if a player strikes a Tomomo, they will lose 1/4 of their total points. The higher the player scores, the more likely they are to receive a better effect, however, they may still receive a bad effect.[5] Like all minigames, there is no guarantee that the part will drop. The player must score a minimum of 2300 points (lowered from 2600), have Dapper Poppo on the left, and make no mistakes to get the part.[6]

Poppo Shooting is a dart-throwing game, new to the rerun, where balloons must be shot with darts. Darts are shot from a fixed position on the player's sprite. Balloons with symbols signifying the bonus they give will float up, and 3 balloons with the same symbol must be popped to get the bonus. The player only has 6 darts to throw in order to accomplish this. If all darts are thrown, or time runs out without popping three balloons with matching symbol, the player will receive a negative effect.
Poppo March is a minigame new to the rerun featuring many different Poppos with various cosmetics equipped. Three certain types of Poppos will be shown at the start of the minigame, and the goal is to click on the Poppos with the right costumes as they march past. The player only has 3 clicks to accomplish this with. The higher the player scores, the more likely they are to receive a better effect.