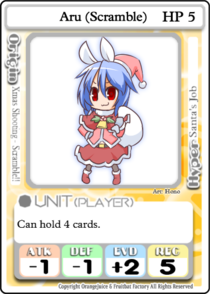 For the alternate version see: Aru.

Aru (Scramble) (アル (スクランブル) Aru (Sukuranburu)) is one of the bonus characters in 100% Orange Juice!, unlocked by owning the game Xmas Shooting - Scramble!! on Steam.

Aru (Scramble) is the counterpart to Aru, sporting the same stats and the passive of being able to hold 4 cards. As such, she fills the same role of being a star-collector while avoiding combat. She possesses below average ATK and DEF stats, but they're balanced out by a solid HP stat together with the highest base evade stat, tied with Suguri and Suguri (Ver.2), allowing her to avert most damage. She also has the ability to hold 4 cards, which gives her more possibilities to avoid enemy encounters.

Her main disadvantage is her low combat stats apart from evade, which makes Win Normas not an optimal game plan. Having a high EVD stat will incite players to Evade, but due to the nature of evade, a failed roll will cause high damage or most likely a KO. 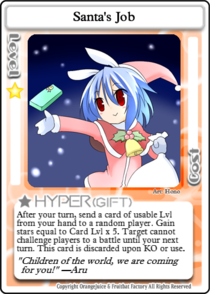 After your turn, send a card of usable Lvl from your hand to a random player. Gain stars equal to Card Lvl x 5. Target cannot challenge players to a battle until your next turn. This card is discarded upon KO or use.
Hyper Info
Effect Type
Gift
Level
1
Cost
0 ★
Symbol

Illustrator
Hono
"Children of the world, we are coming for you!" ―Aru

Aru (Scramble)'s Hyper is Santa's Job. It is a Gift Card that gives a card of usable Lvl from Aru's hand to another player after her turn. She then receives 5x the level of the card in stars. The player who received the card is unable to battle another player until Aru's next turn. The card is discarded on use or KO.

Santa's Job helps Aru (Scramble) be more passive in that she can deny a player's ability to attack every turn and reward herself with stars, provided she has cards to give. As the Hyper is a major advantage to Aru, the player should focus on acquiring the card, landing on

Draw panels to supply cards for its effect, and avoid being KO'd to keep the Hyper.

The player should take advantage of the effect by packing cards that are not particularly dangerous to Aru. One card that works well with Santa's Job is

Unlucky Charm. Since the card can be given away at the end of the turn, Aru doesn't have to pay stars to be rid of it, while also giving it to someone who will have to pay. This same effect also occurs with Mimyuu's Hyper,

Evil Spy Work - Execution, where giving it to another player will make them take damage. Higher level cards can also work with Santa's Job in getting stars, but also runs the risk of said cards being used against her. Cards that don't influence her like

Dinner are recommended for greater star gain at a lesser risk.

The main disadvantage to the Hyper, however, is that it can quickly empty the player's hand of potentially useful cards the player would like to use later. The player will also run the riks of supplying powerful battle cards that other players have put in their deck, such as

Accel Hyper, to opponents that want to hunt the player. It should also be noted that Santa's Job does not stack, meaning that if the player is holding 2 of the Hyper, they will not earn double the stars.