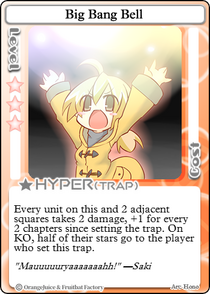 Every unit on this and 2 adjacent squares takes 2 damage, +1 for every 2 chapters since setting the trap.
On KO, half of their stars go to the player who set this trap.
Hyper Info
Effect Type
Trap
Level
3
Cost
0 ★
Symbol
[[File:|30px|link=]]
Illustrator
Hono
"Mauuuuuryaaaaaaahh!" ―Saki

Saki's hyper is Big Bang Bell. When played, Big Bang Bell is set on the user's current panel. When landed on by any character including the player, it will deal 2 damage plus an additional +1 per every 2 chapters that have passed since it was originally set. The damage will affect the player who landed on it and all players within 2 adjacent board panels, including diagonally. (The blast radius is highlighted with glowing panels when the player initially sets the card) If any player is KO'd, half of their stars are given to the player who set the Hyper. (KOs by the Hyper's effect do not count as wins)

Big Bang Bell is one of the best trap cards in the game, dealing massive punishment to opponents and potentially high gain for the player, all for the low price of 0 stars. The player also has the added bonus of being immune to the trap themselves as they will simply regain their own stars. As a result of this, the Hyper is relatively safe to drop on any panel, and the player should prioritize placing it as soon as possible to allow the damage output to grow. The Hyper is also potentially the most damaging card in the game with theoretically infinite damage output. As a trap, the Big Bang Bell has a variety of uses, and similar to

Self-Destruct has the advantage of creating unease and uncertainty among opponents as any trap set by Saki could be her Hyper. As to be expected, one of the most popular ways the Hyper is generally at it's best when set on an opponent's

Home panel as not only can it deny an opponent from attempting to win the game, but it can also stop both Wins and Star Norma by KOing the opponent. In contrast, it may be smarter to leave Big Bang Bell on a lesser-traveled path to catch opponents by surprise in the late game. It is best to let the bell gain damage and then influence players to take the path where the trap is by placing more traps on the opposing pathway. Field events like MinelayerMinelayer
Every 3 Chapters, a Trap Card will be set on a randomly determined panel. These Trap Cards are not affiliated with the Center Deck, and will therefore not return to the Center Deck afterwards. The cards include:

Mimyuu's Hammer can quickly make opponents forget about the Hyper's location if it was set randomly, and cards like

We Are Waruda can quickly make the trap's location confusing. Big Bang Bell also works well in decks with

Piggy Bank considering that both take time to charge. This occasionally leads to players stepping on well-charged Big Bang Bells thinking they are well-charged Piggy Banks, especially if the player set the Hyper on their own

The Hyper is not without its disadvantages though. As a trap card, Big Bang Bell is directly countered by

Star-Blasting Light, as well as indirectly countered by

We Are Waruda if the opponent gets the card. Like all traps, the Hyper is also opponent-reliant, making it rather unreliable, and while this can make the Hyper extremely strong, it will be for not if the opponent misses it. The player will also not be able to start using the Hyper until Norma 3, which gives the Hyper a late start unless

Price of Power is used. Some opponents will also purposely head toward their

Home panel as quickly as possible if they believe the player set Big Bang Bell on it. By doing this, they will activate it before it's damage output becomes lethal, thus countering its star loss effect.