SUGURI the Best was composed by DEKU and consists of 13 arranged "Best of" tracks from the Suguri series.

Due to the fact that SUGURI the Best, unlike the 100% Orange Juice soundtrack, is composed of commercial music and not royalty free music, the full duration of each song will not be played on 100% Orange Juice Wiki. Only previews from DEKU's spotify album will be shown.[6]

It was announced on June 21st, 2018 that anyone who purchased SUGURI the Best would have additional BGM options to select in their battles in Acceleration of SUGURI 2.[7] Owners of the soundtrack will be able to choose the following tracks before matches: 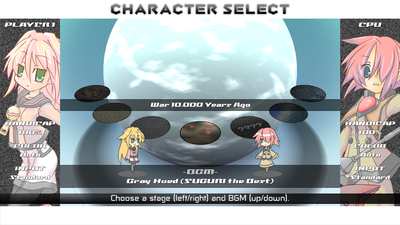 Additional BGMs for Acceleration of SUGURI 2