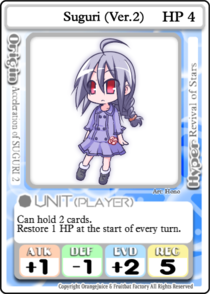 For the alternate version see: Suguri or Suguri (46 Billion Years).

Suguri (Ver.2) is a more passive version of Suguri when compared to her original counterpart, trading away one card in her hand for restoring 1 HP at the start of every turn. Her auto-heal allows her to take larger risks than her regular counterpart, and hurting several other characters' Hypers in the process such as

x16 Big Rocket. Her Hyper reflects this, by turning the majority of the board passive as well. This lets her shut down bully and bruiser-type characters for a few turns, as well as letting her gain stars at a faster rate.

Long-Distance Shot without much fear of it being used against her. 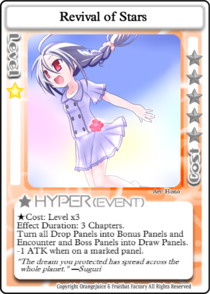 Suguri (Ver.2)'s Hyper is Revival of Stars. For three turns after being used, all Drop Panels on the board turn into Bonus Panels, and all Encounter Panels turn into Draw Panels. Additionally, all players receive -1 Attack when battling on a panel effected by Revival of Stars.

Revival of Stars allows Suguri to completely shut down the board for bullies and bruisers, such as Star Breaker, outside of attacking other players. It has increased effect when Battlefield is active, as it will change all of the changed-Encounter panels into Draw panels, potentially causing the entire map to nearly be filled with Draw panels. Despite that, her Hyper could potentially be used against her. If playing against a star-gatherer such as Kyoko or Marie Poppo, they can use her hyper to their advantage to avoid taking damage and gather stars. 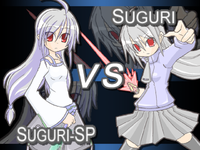