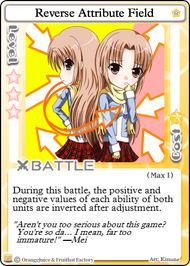 During this battle, the positive and negative values of each ability of both units are inverted after each adjustment.
Level
3 ☆
Cost
10 ★
Limit
1 per Deck
Deck Points

2
Symbol
30px
Illustrator
Kitsune
Rare Card
Expansion Pack
"Aren't you too serious about this game? You're so da... I mean, far too immature." —Mei

Reverse Attribute Field is a potentially deadly 3-star level battle card that counters some of the most powerful cards and characters in the game. When activated, all player stats and buffs will be reversed, meaning all + values become – and vice versa. It should be noted though, that only the buffs triggered before the card's activation will be reversed, thus if the opponent attacks second, their battle or hyper card buff will act normally.

Reverse Attribute Field itself is remarkably effective against most enemies but mainly toward opponents with stats that sway heavily to one side. Aggressive characters such as Tomomo (Sweet Eater) and Yuki will be guaranteed to roll very poorly and tanks like Fernet and Kyoko will lose their ability to defend themselves. The card can also be paired up well with other cards such as

Little War to try and give the opponents the worse odds possible. On the other end of the spectrum, certain characters with only decreased stats such as Poppo and Kiriko can benefit from the card for a small amount of gain. The card can also be used to protect the player from a boss if they are low on health. Perhaps of all its uses, the most effective use of the card is to counter hyper cards. Certain characters are particularly susceptible as their hyper cards are all about amplifying the player's stats for maximum attack output. The most counterable hypers are

Deploy Bits and the two most notorious

Another Ultimate Weapon and

Blazing!. The card directly counters the stat boosts from the hypers, render the player unable roll anything but a 1 when fully powered up and likely receive stats so low they will be KO'd. In some cases, the player may also suffer a massive star loss as a result, and the game will likely be over for that player unless they have a second plan and recover quickly.

The card is not invincible, however, as some cards and characters can slip right through it. QP and Sweet Breaker (when not using their hypers) are notably immune to the effect as their stats are neutral across the board. Hypers cards which don't affect the player's stats but instead amplify their roll such as

Accel Hyper among others, will be completely unaffected by Reverse Attribute Field as well. Some opponents also may receive an edge of some kind from the effect as, for instance, Fernet may lose her defensive strength, but will gain +2 evasion instead, meaning she may be able to dodge the player in response.