Recovery is a mechanic in 100% Orange Juice! that occurs when any player is KO'd (health drops to 0). As a result, the player can enter recovery after being KO'd as a result of battles, card effects, board panels, or field events.

When a player is KO'd, they will have to roll their dice to recover and get back up and will be unable to play until they succeed. Consequently, the amount of time players spend in recovery can have a large impact on the end result of a match.

When a player is KO'd, their character will appear in their failure pose on the panel they were KO'd on. While KO'd, the player cannot perform their usual actions. The KO'd player will be unable to move, use a card, start a battle, be challenged to a battle, be targeted by boost cards, be healed by a card or field event, or be affected by most field events. The player is not completely removed from the game, however. The player will still gain passive stars at the start of the chapter, they can be affected by certain event cards, can also be affected by some field events, and the character will retain their passive effect. In some cases, the character's passive may even negate the KO cause them to revive faster.

Ways to be KO'd

There are 3 ways a player can be KO'd during a match that feature different potential penalties to the player:

The process of recovery is always the same, however, some card effects can change the rate at which a player recovers from their KO'd state.

If the player uses either 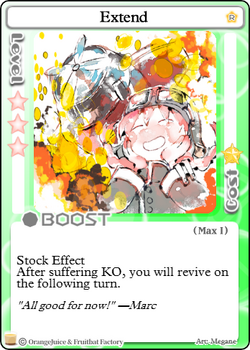 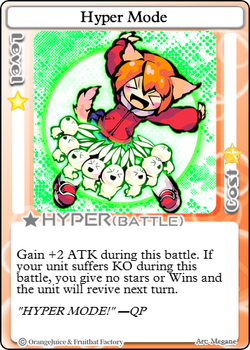 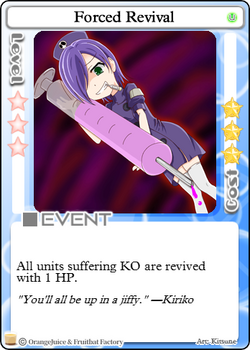 If the player is using the Bonus character, Sora (Military) and is defeated in battle, they will automatically recover on their next turn with half health. Their turn will then end. Otherwise, the play will recover using the traditional process. 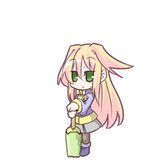 If the player activates Tomomo's hyper 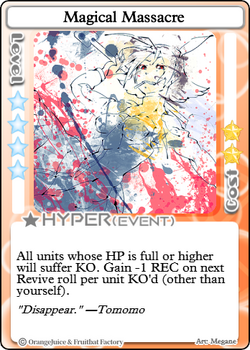