QP Shooting - Dangerous!! (きゅぴシュ～DANGEROUS!!) is a single player video game developed by Orange_Juice and published by Fruitbat Factory. It is the sequel to QP Shooting and the fourth game in the Shooting Series.

QP Shooting - Dangerous!! was released in Japan on December 31st, 2012 during the third day of Comiket 83[1][2] and was the tenth game developed by Orange_Juice. It is the eighth "speed shoot'em up" game created by the developer[3]

One day, all evidence of the existence of pudding vanishes, wiped from everyone's memories except for QP. She sets out for the sky, looking for pudding and eventually encounters her classmate and friend, Syura. Syura is angry at QP, however, for causing lots of noise this morning and is also stressed by the fact that a deadline is approaching on an indie game she is working on with QP. QP asks Syura if she remembers anything about pudding but Syura thinks pudding is an enemy in a video game. QP decided to beat some sense into Syura to try to force her to remember, but Syura fails to remember anything, even after her defeat.

QP eventually runs into Kyousuke, who asks QP why she is dressed as a woman, mistaking her for another person, Kyupita. Kyousuke calls QP trash for dressing as a girl and says that she is not cute at all. QP tries to explain that the situation is a misunderstanding, but she is also furious at Kyousuke for making her more even angry while searching for the lost pudding. Kyousuke, still believing that QP is Kyupita, decides to try to force QP to stop dressing like a girl. Even after the battle, Kyousuke still believes that QP is Kyupita. QP asks Kyousuke about pudding and Kyousuke tells QP that he heard a woman (Krilalaris) yelling the word pudding this morning, and gives QP the location of where he heard this woman, the town circus.

After destroying Green Frog (Grain's plane from Flying Red Barrel) that was piloted by the other members of Waruda (Kiriko, Tomato, and Mimyuu). QP finally encounters Waruda's boss, Yuki. Yuki was expecting QP to come and QP assumes that everything related to the erasure of pudding was Yuki's doing. Yuki then tests QP's love for pudding by battling her. During their battle, Yuki states that QP's love isn't enough and she has to try harder to get pudding back and tells QP to push her love for pudding through her limits, and then Yuki summons Shifu Robot to make QP push harder. Yuki's plan works, and she entrusts QP with the last cup of pudding in the world to defeat the true culprit behind the erasing of pudding, Sweet Breaker.

After going up to the upper atmosphere, QP finally meets Sweet Breaker. Sweet Breaker explains that sweets are meant to spread happiness throughout the world but pudding went well beyond that, bringing chaos and conflict. As a result, she has sealed pudding away, erasing it from everyones mind. QP argues against this, explaining that pudding only brings happiness, and it makes her happy to be alive. Without it, all her happiness is gone. In order to protect her happiness, QP vows to defeat Sweet Breaker. Sweet Breaker calls QP foolish for challenging a god, and then the battle between them starts.

During the battle, Sweet Breaker explains that QP's love for pudding is the reason why her original memory seal did not effect QP, and she decides to seal QP's memories in person. The pudding QP received from Yuki protects QP from the memory seal and tells QP not to give up. The pudding tells QP to use the whole world's love as her power. The power of the love for pudding is gathered from the bonds QP had forged through pudding, and when QP eats the pudding, she becomes a Sweet Guardian, like Sweet Breaker. With her power now rivaling Sweet Breaker, QP defeats Sweet Breaker who is unable to comprehend why the world would want to keep pudding since it will end the world. QP, however, declares that she will not allow chaos to happen as result of pudding's existence. This puts Sweet Breaker's worries to rest and she decides to undo her seal, restoring pudding to the world.

One day, pudding vanished from the world.
From convenience store shelves... from sweets recipes... from people's memories...
All signs that pudding had ever existed disappeared from the world entirely.
People were left unable to even question it...

- With the exception of just one girl -

The name of that girl is "QP".
Realizing that something had happened to the world to cause the change,
she sets out into the sky, seeking to bring pudding back. 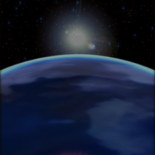 The view of the planet in QP Shooting - Dangerous!!

The world that shown in QP Shooting - Dangerous!! hosts a modern society with cities and vehicles. Animals are anthropomorphized such as QP and Yuki and they coexist with humans, with other animals still existing as regular animals such as chickens and butterflies. In this world, some people and animals are able to fly, QP is seen flying through the entire game, so much of the game is airborne.