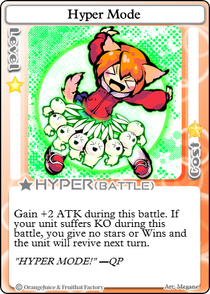 This unit gains +2 Attack during this battle. If your unit suffers KO during this battle, you give no stars or Wins and the unit will revive next turn.
Hyper Info
Effect Type
Battle
Level
1
Cost
10 ★
Symbol
[[File:|30px|link=]]
Illustrator
Megane
"HYPER MODE!" - QP

QP's hyper is Hyper Mode. When activated in a battle, the unit who played the card gains +2 attack. If the unit that played the card is KO'ed during the battle, the opponent will not be awarded any wins or stars and the unity will revive automatically on the next turn.

Hyper Mode is a very versatile hyper card, with a low-level requirement and extremely cheap activation price. The card provides the player with 3 benefits in total during the battle, which gives the user a broad range of options for any given circumstance. In the most general case, if the player has no other battle card and needs to quickly KO a low HP opponent, the +2 attack stat bonus can be extremely beneficial in increasing the players. Additionally, the player can pair the effect with an event card such as

Super All-Out Mode before the battle starts to boost their odds of victory even further. On the opposite side of the coin, if the player is low on HP and is being assaulted by either another player or a

Self-Destruct to prevent the player from losing stars and also ensures the opponent gains no stars or wins from the KO. This defensive use of the card is more common, as it is generally advisable not to use Hyper Mode in any instance where QP is able to normally survive combat. Either way, the card enables the player to take huge risks and escape a battle without any penalties, and given the low price, the player can use the hyper all throughout the course of the match, assuming they are lucky enough to draw multiple copies.

Diverse as it is, Hyper Mode isn't without weaknesses. The main problem the card suffers from is that, as advised above, it is not very good for attacking purposes since the secondary effect is more valuable. Although the card grants an attack buff, it does not guarantee positive result like Sora's

Extraordinary Specs as the player may still roll a 1, yielding a disappointing 3 attack. Thus the player will likely need to take measures to increase their odds of victory, such as boost their stats with an event card or lower their opponent's HP first. The player may also fail to self-KO (if that was their intention) if they roll too high on their defensive or evasive roll. This can be countered by using the hyper at 1 HP but, as to be expected, every additional point of HP the player has will increase the odds of failure.