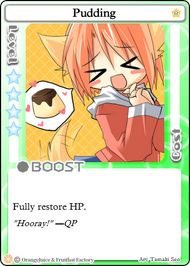 Pudding is a 4-star boost card that fully heals the user.

Pudding provides the greatest single-target heal in the game for no cost, tied with

Sky Restaurant 'Pures'. As a healing card, Pudding provides the greatest benefit to defensive characters like Fernet and Kyoko as well as high health characters like Marie Poppo and Krila. Shifu Robot can use Pudding to recover all of its HP after a KO or a

Turbo Charged activation. Characters that depend on collecting wins for normas can also make use of Pudding, as they can't collect wins while they are KO'd. Tomomo can makes particularly good use of Pudding despite her low HP, since she suffers the most when being KO'd as a result of her high recovery roll. Tomomo's hyper

Magical Massacre can be used to take advantage of Pudding when an opponent uses it, KOing them and rendering the card wasted.

While almost all characters can benefit from Pudding, not every character wants to be the one wants to add it to the deck. Characters with very low maximum HP like Peat and Nanako do not benefit much more from Pudding as they would from

Saki's Cookie. Pudding heals other characters for far more than them and

Saki's Cookie can be played much earlier, making it the preferred healing card for these characters. Store Manager cannot play Pudding, but his opponents can in order to survive his vicious assaults. As such,

Bloodlust are generally better healing options for him. Lastly, Kiriko cannot heal at all due to her passive, making the card useless for her.