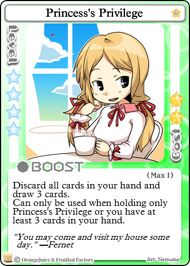 Princess's Privilege allows the user to draw the most cards of any non-hyper card in the game. It is an extremely useful card for characters that need to sift through the deck for specific cards that they need. For example, characters like Tsih and QP (Dangerous) can use Princess's Privilege in the late game to help them find gift and pudding cards respectively. Marc in particular benefits greatly from this card in the late game, as it helps her find

President's Privilege to fire them off more often. Since this card tends to favor specific characters, it can be used as a "bad" card that other players will have difficulty using, similar to

For the Future of the Toy Store.

Due to its high norma requirement, most players would prefer

Passionate Research as ways to draw cards. Characters that tend to use cards quickly will have trouble holding on to the cards necessary to use this. Trap users like Saki and Yuki (Dangerous) are an excellent example of this, as they would prefer to get their traps onto the board as soon as possible rather than hang on to them for long. Mei has a horrible time with this card for multiple reasons. It can be hard for her to get rid of it in the early game so she can get

Red & Blue. Playing it will cause her to discard

Red & Blue as well, forcing her to try and discard it by other means. Due to her reduced hand size, Suguri (Ver.2) can't even play Princess's Privilege unless she is given an extra card though CharityCharity
Every 5 Chapters, all Players will receive 1 Card at the beginning of the Chapter. or via a card effect like