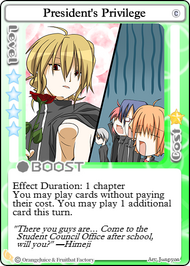 Effect Duration: 1 chapter
You may play cards without paying their cost. You may play 1 additional card this turn.
Level
4 ☆
Cost
10 ★
Limit
3 per Deck
Deck Points

2
Symbol
30px
Illustrator
Junpyon
Common Card
Mixed Pack
"There you guys are... Come to the Student Council Office after school, will you?" —Himeji

President's Privilege, is one of the most powerful boost cards in the game and is the best friend of almost any character with an expensive hyper card. While its 4-star level requirement is high, its effect and cheap activation price more than makes up for it, enabling the player to use the strongest and most expensive cards for the cheap price of 10 stars.

President's Privilege has one purpose and one purpose only, to help the player destroy the opponent in the late game, and as a result, the card is a staple in many decks. Expensive hyper cards like

x16 Big Rocket, and other high price tag cards such as

Star-Blasting Light can have their massive costs reduced substantially, affording much easier and frequent deployment. Unsurprisingly, the card can also be used to great effect with various battle cards such as

Accel Hyper allowing the player to save large amounts of stars and surprise the opponent under the right circumstances. It should also be noted that President's Privilege works on all the following cards the player uses after it's activation, which means the player can create a deadly expensive combo using an event and a battle card for cheap in a single turn. Sealed Guardian and Little War, as stated previously, are perfect for most combo plays, as most characters have either a battle, boost, or event hyper card that can be used before or after one of them.

Witch's Hair Lock, have virtually no reason to have the card in their deck unless they need it for a combo with other cards in their deck. This, however, runs the risk that a player with a high-cost hyper will draw it and use it against the player. As a result, the player should think about whether the card is crucial to their success, and if it's not, no copy needs to be brought.