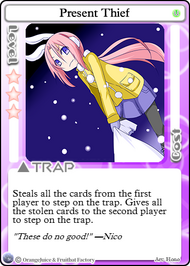 Present Thief is a 3-star trap card that can be triggered twice before being removed from the board. The first time it is triggered, the hand of the victim is taken by the trap. The second player to trigger the trap then receives the stolen cards.

Present Thief is a trickier to use alternative to Tragedy in the Dead of Night. While Tragedy is much safer to use and does not require two activations to function, it only steals one cards as opposed to the entire hand like Present Thief. Present Thief can be placed on the player's own

Piggy Bank set there. The player can then return to their

Home and collect the cards. Mei is a great user of Present Thief, as she can both use it for its intended purpose, or trigger it herself to easily obtain

Red & Blue. If the player is extremely lucky, they may even be able to obtain multiple copies of

Red & Blue by storing one in the trap, then circling back around the board to collect it. Store Manager can also take advantage if this trap's hand-emptying effects to clear his hand of unwanted cards if three

Flamethrower are not enough.

Due to it's unpredictable nature as a trap card, Present Thief can be tough to pull off correctly. It can be difficult to get the right opponent to land on it at the right time. If a player with no cards in their hand triggers Present Thief, it is effectively wasted. Alternatively, If the player manages to get their hand stolen by Present Thief, they risk giving their entire hand to an opponent. It faces competition for deck slots with Tragedy in the Dead of Night, as this card can never harm the player if they are the one to set it and give the player its card immediately.