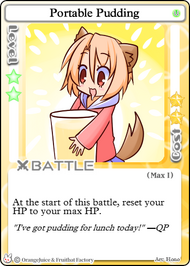 At the start of this battle, reset your HP to your max HP.
Level
2 ☆
Cost
20 ★
Limit
1 per Deck
Deck Points

Portable Pudding is a 2-star battle card that sets the user's HP to their maximum HP. The effect is treated as neither healing nor damage.

Portable Pudding is a relatively pricey battle card at 20 stars, but it can be an effective a tool for giving damaged characters a surprise advantage in combat against attackers. It works really well for characters with high HP pools, as they are healed more than most characters when using this card. Offensive characters with low defenses but higher HP pools like Yuki and especially Kiriko can also make good use of Portable Pudding, despite it's high cost. It can bait characters into attacking her, thinking her an easy target, allowing for her to turn the tables on them. Its low level requirement means it can be quickly put to use, though

Portable Pudding's high cost can make it a problematic card in the early to mid game, when 20 stars is a large investment. Players will need to be able to counter-KO their opponent or have a good reason for not being KO'd themselves in order to make up for it's cost. It may be better saved for the later game, when paying the 20 star cost would be less painful than the stars lost by being KO'd by an opportunistic foe. Characters that excel at picking off opponents for wins and stars should consider the possibility that Portable Pudding may save their targets and even allow them to deliver a devastating counterattack.