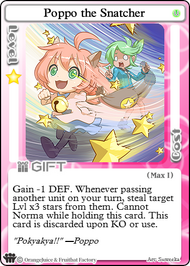 Gain -1 Defense. Whenever passing another unit on your turn, steal [target lvl x 3] stars from them. Cannot Norma while holding this card. This card is discarded upon KO or use.
Level
1 ☆
Cost
0 ★
Limit
1 per Deck
Deck Points

Poppo the Snatcher is a gift card that causes the holder to steal stars from players they meet on the board. Passing or landing on the same space as an opponent will steal 3 times their level in stars. In exchange, the holder's DEF is reduced by 1 and they cannot norma. The card is discarded when used or when the holder is KO'd.

The star-stealing passive of Poppo the Snatcher makes it an excellent counter to bulky star collectors like Fernet or characters that lose less stars on KO like Chicken. In general, the usefulness of this card depends on the character's ability to overcome its defense penalty, as moving past an opponent puts the player in a prime position to be attacked. As the name suggests, Marie Poppo and Marie Poppo (Mixed) both make good use of this gift card by using their hypers to reposition away from enemies after stealing their stars. Evasive characters like Suguri do not rely on their DEF much to survive in combat, mitigating the drawbacks. However, the same characters can find themselves getting KO'd a lot due to the unpredictable nature of evasion, making this card difficult to hang on to if the player is being stalked by bullies or is just unlucky. Thanks to her passive, Kae can use the drawback of this card as a persistent ATK boost. Miusaki is more or less unaffected by the DEF penalty due to her already poor defense and damage reducing passive ability, allowing her to use Poppo the Snatcher without any fear of repercussions. Characters like Nico and Tsih that have synergies with gift cards should consider Poppo the Snatcher for their decks. Although both characters have downsides to using this card (Nico can't steal stars and Tsih becomes even more frail), there are not many options to choose from that both benefit the player and put their opponents at an exploitable disadvantage if they happen to draw it.

Although most characters can play Poppo the Snatcher in their decks, the majority of the roster puts themselves at some degree of risk by doing so. The defense lost while holding this card can severely impact the survivablility of characters with neutral or negative DEF, especially if they have low base HP. Marc is a prime example of a character who cannot afford to hang on to Poppo the Snatcher while enemies are around. Characters that this card is designed to counter like Kyoko and Robo Ball should never add this card to the deck. Even if they can benefit from holding Poppo the Snatcher themselves, there is a much larger chance that the card will end up in the hands of their opponents and be used against them.