Play of the Gods 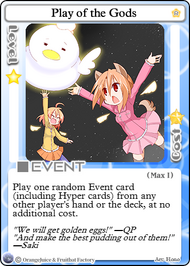 Play one random event card (including Hyper cards) from any player's hand or the deck, at no additional cost
Level
1 ☆
Cost
10 ★
Limit
1 per Deck
Deck Points

2
Symbol
30px
Illustrator
Hono
Rare Card
Acceleration Pack
"We will get golden eggs!" —QP
"And make the best pudding out of them!" —Saki

Play of the Gods is a 1-star event card that plays another random event card from the deck or from another player's hand for no additional cost. This can include hyper cards as long as they are events and even cards higher than the player's current level, but not other copies of Play of the Gods. If there are no events left in the deck or in any other player's hand, the card will miss.

Play of the Gods has many uses for players who don't mind a little random chance. It is great for cheating out high level or expensive event cards such as

Star-Blasting Light way earlier and for far fewer stars than normal. While the player has little control over the outcome other than what cards they add to the deck, its chaotic nature can be a boon for players who like to run event cards that some players wouldn't want to play. Normally, if a passive character draws

Super All-Out Mode, it will likely be discarded due to the high cost, high risk, and overall low chance of reward for that player. Play of the Gods can force these players to use it, preventing the card from going to waste. Play of the Gods even has the potential to steal hyper cards from other players as long as they are events. While most event hypers tend to be one sided in their benefits, some can be beneficial no matter who plays them. For example,

Subspace Tunnel will benefit Marie Poppo (Mixed) even if someone else plays it, as she can still use the warp panels that it spawns. Sweet Breaker, Mimyuu, and Suguri (Ver.2) all don't mind having their hyper cards played at someone else's expense and will still benefit from their effects.

Unfortunately, the majority of characters with event hypers should should make it a priority to not add Play of the Gods to their deck. This card can be extremely troublesome for some characters like Aru or Krila, who's hypers benefit them more than their opponents. Having

Present for You or

Plushie Master stolen will set them back as well as give the thief a huge edge in the game. Characters such as Kiriko or Tomomo will also suffer from having their hypers wasted by a Play of the Gods, as they need to wait for the perfect moment to get the most use out of them. The risks of getting a hyper stolen far outweigh any benefits that the card can bring them. In addition, Play of the Gods can sometimes play events that are detrimental to the player when they least expect it, such as

Sealed Guardian, or even a poorly timed

Dinner. Players who do not run event cards should not run Play of the Gods, as there is no guarantee that their opponents will bring event cards that will benefit them, if any at all.