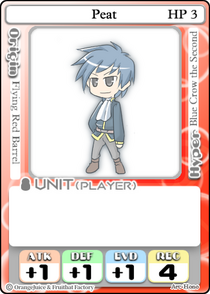 In Co-op mode, Peat doesn't change much as his hyper remains the same, however, his recovery stat rises.

Like all buffed attack stat characters, Peat can be an effective attacker. With the stat boost at the role's max level providing him with a +3 attack stat, Peat can deal decent damage every attack. When combined with his hyper,

Blue Crow the Second Peat can deal a massive amount of damage to a boss, even with a low roll. Meanwhile, his partially buffed defense and evasion stat can help the player survive to fight another battle. Despite his strengths, it would generally be best for the player to have an ally who is either a guardian or supporter to help prevent Peat from being KO'd, so he can avoid the higher recovery from the role.

While not as strong defensively as fellow low HP character Nanako, Peat can reap the benefits of being a guardian by gaining a powerful defense stat to keep him alive longer. Given that peat already has a slightly buffed attack stat, the player will be able to battle the boss with a bit more peace of mind that they can likely survive the counter-attack delt by the boss. The role is definitely far from perfect for Peat, however, as the player won't really be able to provide shields to allies as a result of Peat's very low HP.

This is one of the roles that fits Peat best. Peat's REC value is quite low compared to other positive ATK value character (only rivaled by Tomato), allowing him to get back much faster after being KO'd to support teammates. In addition, his hyper provide very great survivability against boss's attack (especially against multi-dice attack), so that he can stay alive longer to revive teammates. This is further supported by +2 MOV from Supporter's bonus, which enable Peat to chase bosses/minions effectively. +2 EVD also makes him dodge many more attacks with grace.

Peat should more or less never be used as an avenger as his stats do not align well for the position at all. As Peat has one of the smallest HP pools in the game, he realistically cannot benefit from the role's ability even with the +2 HP boost the role provides at max level. In general, Peat does not respond well to damage and usually, the player's goal is strike first in combat, to hopefully deal a great amount of damage before being KO'd from his low HP. Attacking second as the role requires contradicts this playstyle and likewise doesn't work very well with both Peat's low HP and only semi-effective defense buff. While the player can theoretically ignore the role's purpose and just use it as an HP booster of Peat, the inability to reap the benefits of the role make it a poor choice.

Blue Crow the Second (with 4 cards, he gets a devastating +5 ATK and DEF). Given Peat's low REC and survivability, he can spit out a decent amount of card to his teammates, along with his hyper, which can protect other teammates from being KO'd by a high attack roll from the bosses.